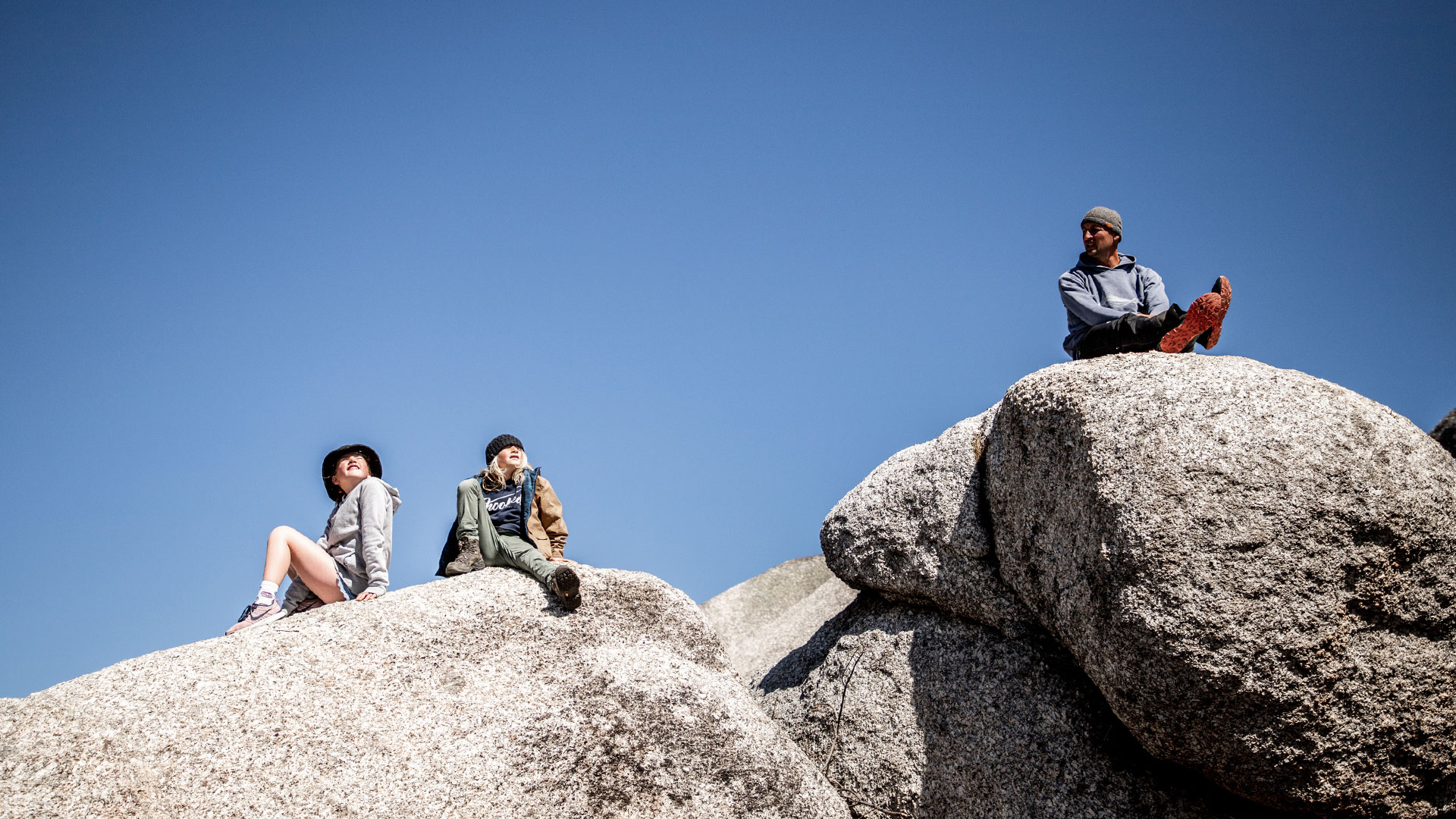 Is it the 48 hours of rain and grey skies that got me out of my writers-hibernation? Or is it the Soča that grew from a beautiful blue/green river to a massive grey river that flushed the dust out of my brains. Or is it the idea that it has been ten weeks already without typing a single word? Or maybe it’s the dozens of mails and messages I received, asking me why the hell I leave my fans in the unknown. Or maybe the critics got the best of me and I finally managed to get out of my sobbing-corner.
I guess, it’s the first, or who knows, the last. It doesn’t matter, enjoy.

Leaving Portugal was inevitable and saying goodbye was harder than I would have imagined a few weeks before.
Before we left on our trip, I wasn’t sure if Portugal would make a good destination, but Katrien thought otherwise. Unlike me, she had high hopes for the country and it would be the ideal place to prospect for Hooked. (Which we successfully did, but more on that in the future.)
Our Iberian adventures started, as I mentioned earlier, ten weeks before. A thirteen-hour boat trip brought us from Sardinia to Barcelona. We were lucky that the sea had calmed down, the night before a heavy storm rampaged the Mediterranean. When we drove aboard the ship we could see the other vehicles chained to the floor of the cargo area to prevent them from whatever a storm would do to them.

Sometimes I wonder how I would have felt and what crazy thoughts would have gone through my head, but I’m glad I didn’t find out. I’m simply not the most sea resistant dude.

Our first stay was in Casteldefels, a small coastal town some 30 minutes from Barça by train. From there we had a whole week to visit the city and its surroundings. Barcelona is a great city but in my (and Katriens) opinion it lost a lot of its charm. I visited the city some 20 years ago when the city had a bit more roughness around the edges and when it still was a lot cheaper to visit.
City tripping is fun, but if we really have to choose, we go for nature and the outdoors. So we drove further south to better temperatures and new unexplored horizons.
We found ourselves a lovely campsite with a great view on the lovely village of Bocairent and the surrounding mountains. It felt good to be out camping once more. And camping is what we did and nothing much else. Sleeping in the van, cooking outdoors and being outside all the time was already enough.
From there we drove a bit further south to a place not so far from Cordoba.
The Mezquita-Cathédral de Cordoba is a magnificent piece of cultural and religious crossover art and a must when you are in the area.

We didn’t have a lot of time to visit the south of Spain because we wanted to spent at least six weeks in Portugal, so we continued our trip.
Driving through Spain (and before Italy) made me wonder if the monoculture landscapes of orange or olive trees are romantic or frightening. The question remains unanswered. Don’t get me wrong, I really like endlessly boring landscapes like we saw in the east of Georgia and Turkey, I’m just not sure I like them when they’re manmade.
The same feeling crept inside me while driving through Portugal. The eucalyptus tree is everywhere. Where there are still trees left that is, a lot of them burned in recent forest fires. Some people think it’s some kind of conspiracy that the paper industry and/or the companies that own the rescue helicopters light the fires. Whatever the reason, it leaves an entire country scarred.

Our first stop in Portugal was: Penacova near Coïmbra. That would be our more permanent stay for the next six to seven weeks. Penacova is a small and sleepy village in the hills that slope gently around the Mondego where nothing special happens. A perfect place to empty your mind.
From there we visited Aveiro , Coïmbra, Ericeira, Setubal, Lisboa, Cascais, Sintra, Foz Do Arelho, Peniche, Figueira Da Foz, Porto, Serre Da Estrela and Esposende. Don’t expect them all reviewed.

In Ericeira the surfbug infected us. We went to see a serious competition and there was no more doubt about it. What they can… We can’t, but at least we’ll have a crack at it.
We took lessons in Peniche, Figueira Da Foz and Esposende. It’s amazing how addictive the sport is, especially when you take that first wave without falling of and make it all the way to the beach. You just want more. Or when you take that first big wave and you manage to manoeuvre your board in the same direction as the wave is going. Or when you sit on your board watching the waves, trying to decide which one to take and when it turns out to be a good one too. Or when you are paddling for the perfect wave and you realise that you’re arms need an upgrade and you hit your physical boundaries again. Damn, so many reasons and I didn’t even mention the best one yet. It looks so fckn cool.

Porto was a girl thing, Katrien met up with two close friends there. I heard they had long philosophical discussions, dove under in the culinary history of Portugal and that the occasional beverage on a sunny terrace was nothing more than a necessity.
I, on the other hand, got myself a fishing licence (which wasn’t easy) and started fishing on the river Mondego and it was epic. I caught the most beautiful sea-run brown trout and even better,… Guust also caught a few. You should have seen his face while holding an almost 50 cm trout… The first few fish were the ones I hooked so he could reel them in, but he also caught a few of his own. The best way to learn how to fish is actually catch some and the Mondego prove to be the perfect spot.
The water temperatures were high enough to go in without waders. It’s hard to describe but the feeling you get when you spot a nice fish hiding under the blooming ranunculus aquatilis, you cast a dry fly and it doesn’t take, you make an other cast and it still doesn’t take, you make a third cast and see a massive specimen rise for the fly and slurp it from the surface, than… when the hook is set and the water explodes, you feel alive. It’s you versus nature and sometimes nature wins and sometimes you do. That makes the beauty of it all.

The Mondego is the only river that springs in Portugal and debouches into the Atlantic in Portugal. It springs in Serra Da Estrella, which is a beautiful region in the Portuguese mountains where we spent a few days being overcome by the beauty of it all. It’s an absolute must do. We found ourselves a nice campsite where we could spend our nights under a magnificent sky filled with stars (it must be the reason why the region got its name). The nights where still very cold, but we could almost feel the warmth from those distant suns.
During the day we did a lot of driving, which is something we don’t do a lot, but there it simply felt right. (And maybe there was another reason involving our aging bodies, trying to look cool on a surfboard and cracking ribs in the process.) The small, curvy roads took us up and down to beautiful places like small villages with ancient histories, up mountains where you can ski and through small, intimate valleys that make you wonder how life would be when you actually live there (a thought that crossed our minds many times).
The one constant through all that beauty is: worry.

We travelled for 20 000 k and climate change is real and it’s out there. We worry when we see vast areas that are destroyed by forest fires and drought, we worry when we hear that they only could ski for one weekend that year because there was almost no snow, we worry when people call us lucky because it didn’t rain for months now, we worry because we saw so many beautiful things that are on the verge of disappearing for ever. It’s just a shame that so much beauty might go to waste when we don’t act now.
Luckily there’s still a bright side, we saw beautiful and sustainable initiatives too: local manufacturers of wool that work with local shepherds, that don’t pollute and pay fair wages, surfers that try to create awareness about the sea level that is rising and that gains in destructive power year after year, beekeepers that work so very hard to keep one of the most important insects alive, farmers that turn away from industrialised farming and start producing on a smaller scale that’s better for the planet and us,… You name it, they are out there and making a difference. Something we all can.

Portugal in general is a must do. It’s a place that has it all: a great cuisine, the friendliest people ever, beach versus mountains, tranquillity versus action and it’s cheap. (Accept for the toll roads, those are very expensive, so it’s better to avoid them.)
We’ll be back some day; to surf, to hike in the mountains, on business or just to be back. Future will tell!

Portugal was our most western destination, so only one is still missing. Yep… north. It’s time to make our way up north.
From Portugal we drove through Spain to France where we needed to make two necessary stops again. We have friends who live in the Pyrenees and we couldn’t drive by without a visit of course and we decided that we should meet Marie-Thérèse and René too.

Who and why, see you next time.

A special thanks to those who made our trip even more special;

Thank you, Inger, for having us in Penacova. We really enjoyed the sunny mornings on your beautiful terras and how they made a great beginning of our days.
And of course the Mondego, where the fish are beautiful and big.

Thank you, Jenny. Your beautiful house made us feel like kings and queens. We will always remember it as the fancy place where the surfbug infected us.