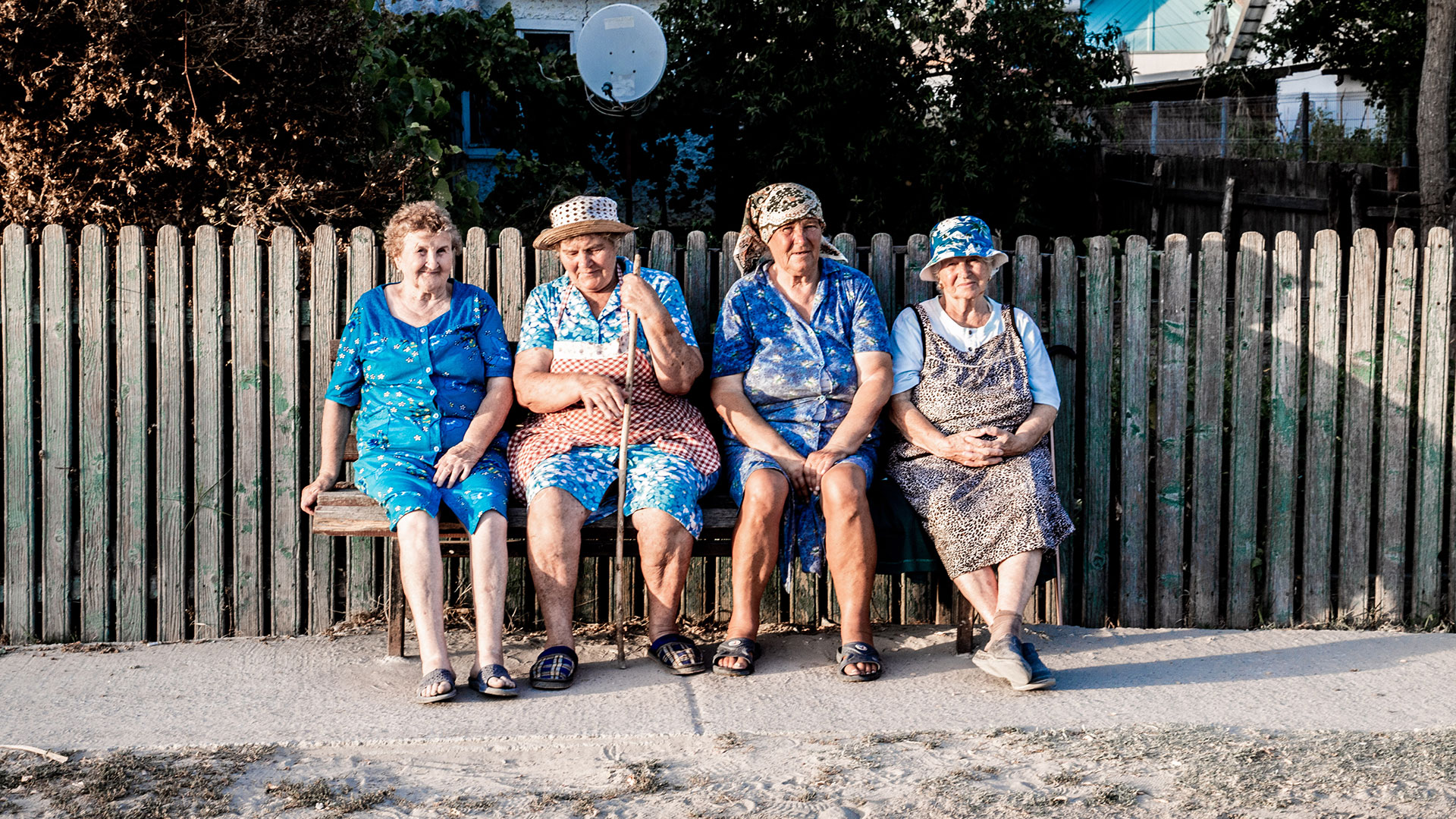 As the sun sets and the mists fade, we leave for the dark home of Vlad “the Impaler” Dracul. We prepare ourselves for the worst and hope we’ll make it out alive as mortals. In the shady distance on a hill ahead, a castle rises from it’s shadows. Small windows look down upon us and we feel watched by the evil that we’re about to meet. As we go closer, the air thickens and breathing becomes more and more difficult.
We stop, reconsider and decide to keep going, ignoring the heavy feet that carry us.
The wind wispers, “Blood, blooood, blooooood,…” Is this the last sound we’ll ever hear? 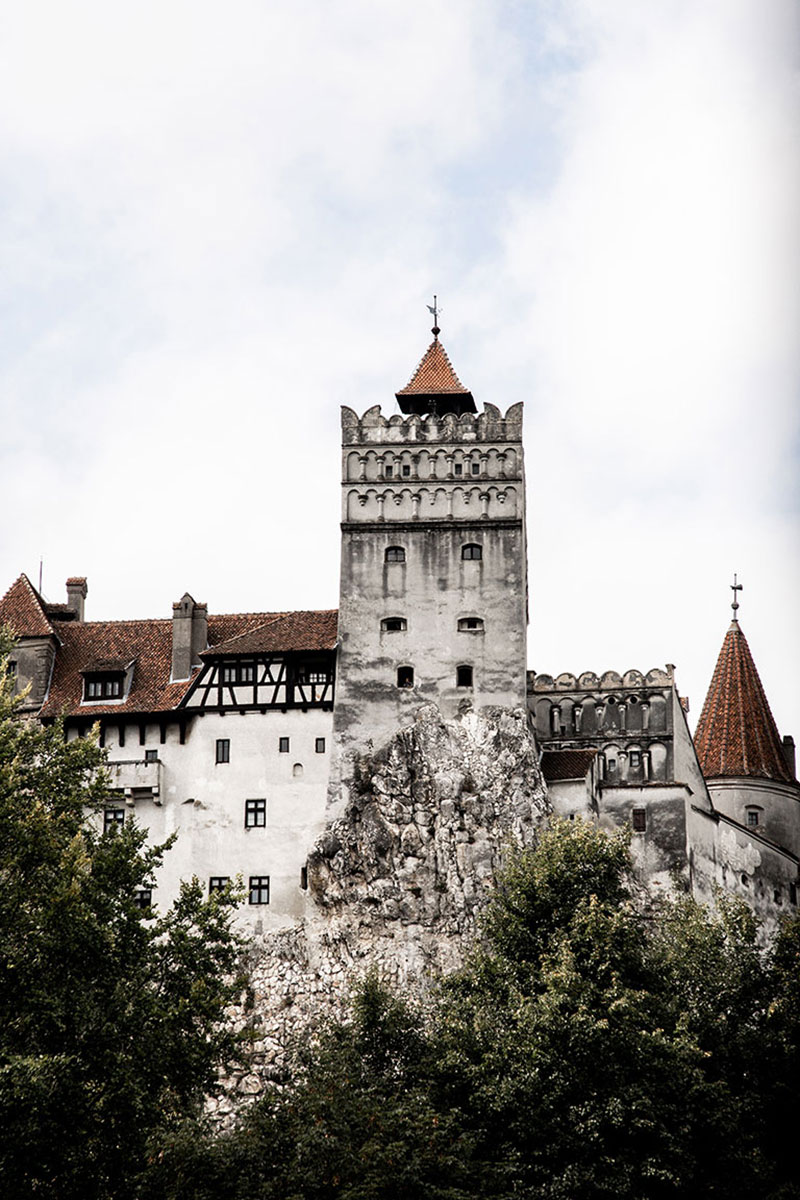 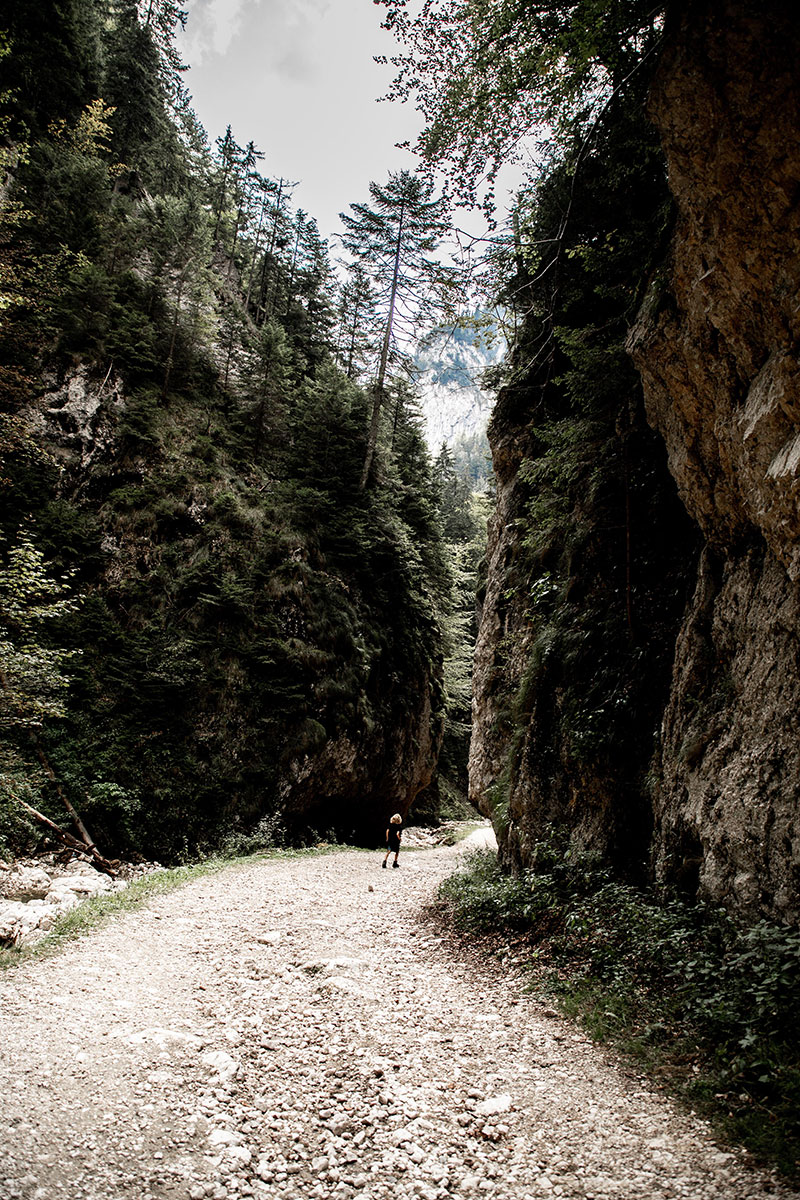 Of course not, but what’s a visit to Romania without doing something Draculish?
Well, just as good as any other.
Of course we went to Castle Bran, to visit the place that became legend when they made Bram Stoker’s Dracula there and not for being the home of our most famous vampire. Bran feeds the Dracula myth very good as you look at the town and it’s many souvenir shops. What we liked most is the castle itself. It’s a beautiful place of which you actually believe that there used to live people and that it was comfortable and cosy too. It felt very much like home, to someone rich and of royalty in the medieval and lesser medieval times, that is.
Cool fact is that Guust went up there with a plan. He desperately wanted to leave that wobbly tooth, that was bugging him for a few weeks then, behind. So he pulled it out and threw it in the well. The result suits the environment, won’t you say? 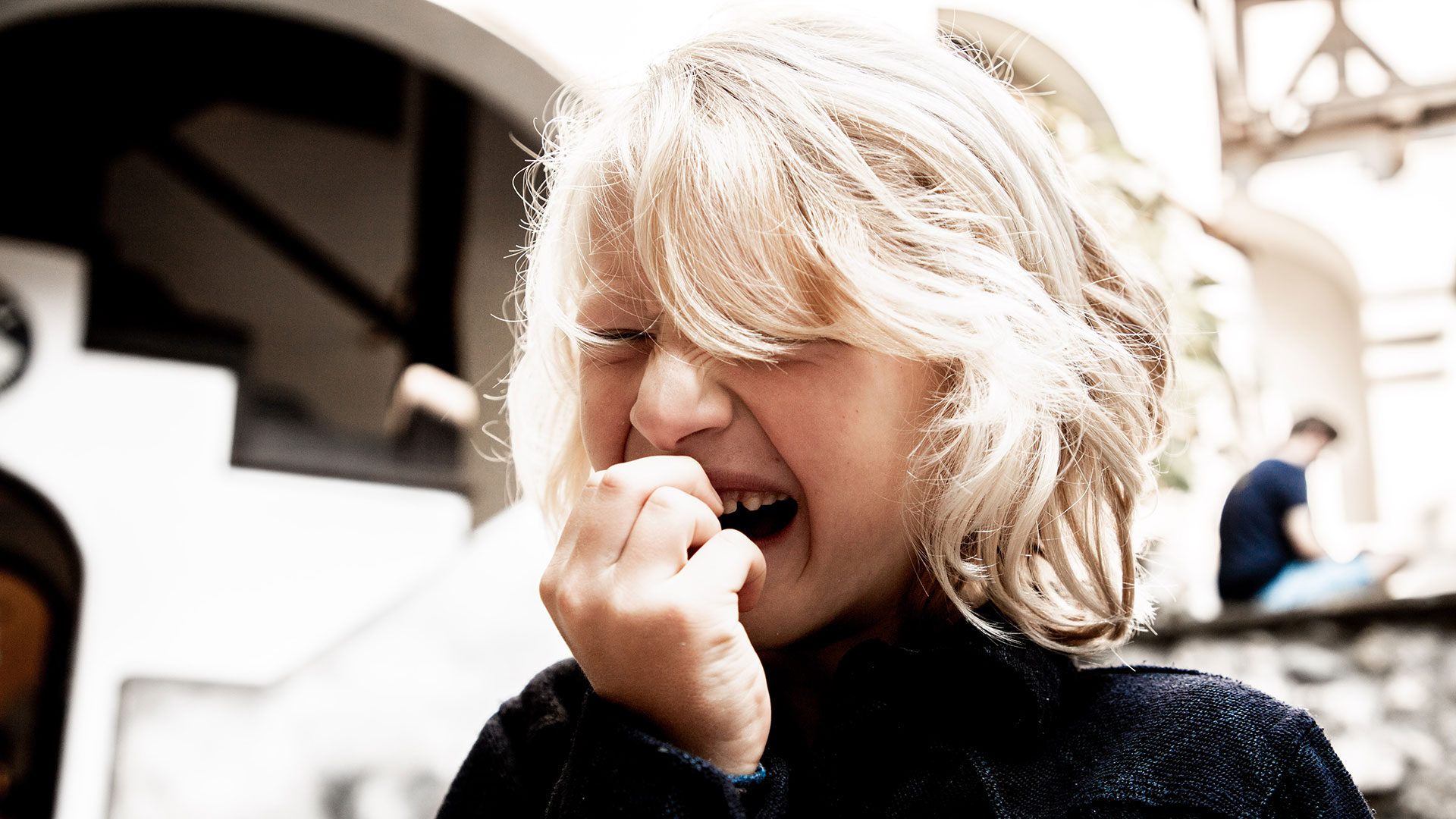 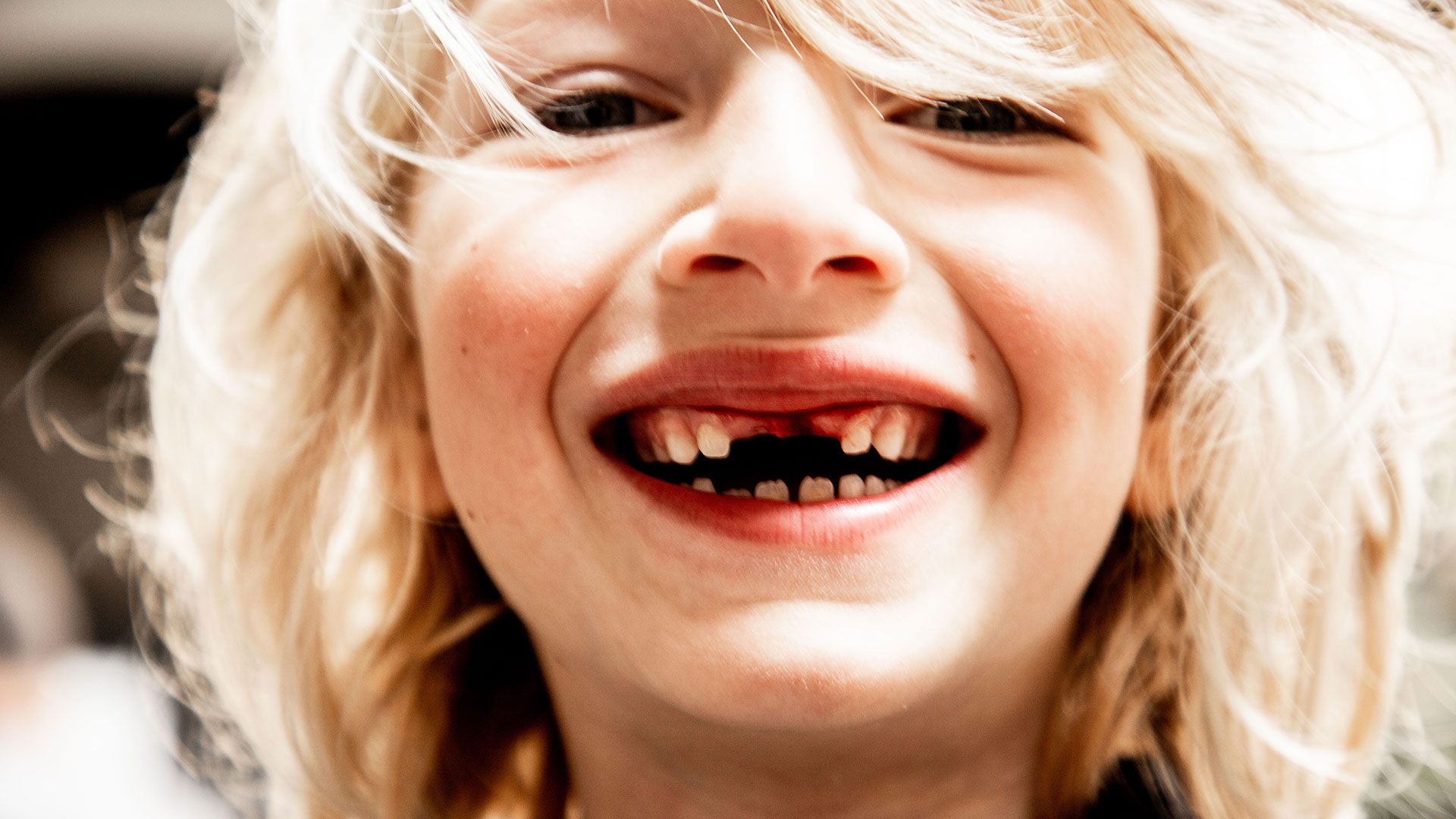 Not far from Bran lies Zarnesti. There we found a good and well-equipped campsite with a fantastic outdoor cooking and eating area, a friendly and helpful owner and a large common “living”room.
Close to the campsite is a bear sanctuary (they also have some wolves and deer) we visited and I must say that it is quit impressive how people are able to torture harmless animals to make some extra cash or to entertain themselves and others. We saw a male bear that was blinded with needles and kept on drugs at the entrance of a restaurant so people could safely pose with him or feed him beer or whatever. There was a female bear that sat in a cage, in someone’s yard for 12 years. Even the floor was made out of iron bars so it burned in summer and froze in winter. She was kept alive on corn only. And there are a dozen more stories to tell like that.
It’s unbelievable that man is capable to something cruel like that.
Luckily it’s not only mistreated animals who find refuge here. Some animals are brought there after a car-accident or when they come to close to civilisation to find food or shelter and when they become a danger to man or themselves. It’s not the best solution because they should have there place somewhere in the wild where they can roam free and have a good life, but it’s the next best thing.
A place where they do live free in the wild and where we did a small hike, is National Park Piatra Craiului. Not that we saw any bear, but the tracks in the mud were unmistakable the ones we hoped for. I’m always surprised about how happy I get by the sight of merely a paw in the mud. 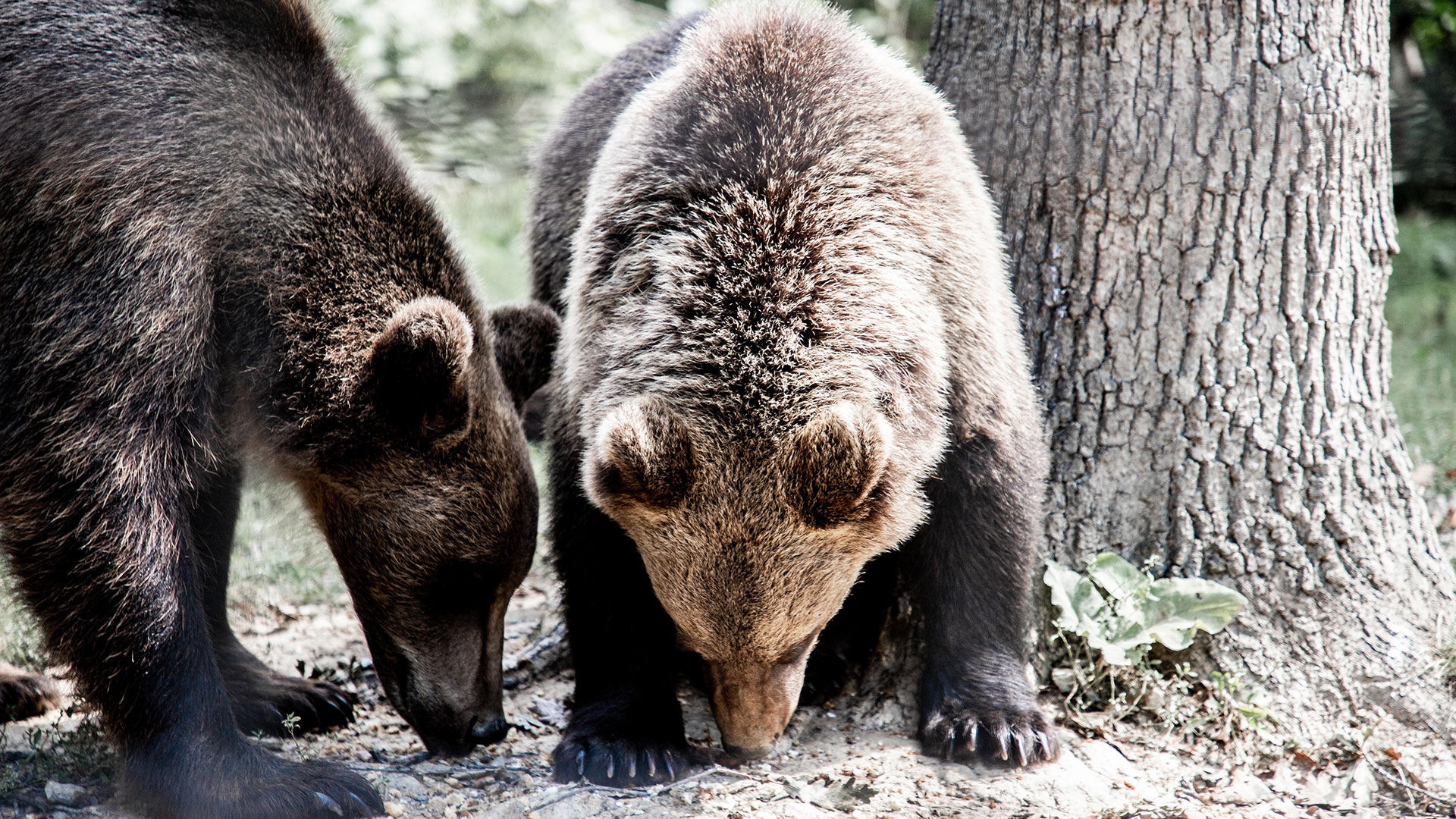 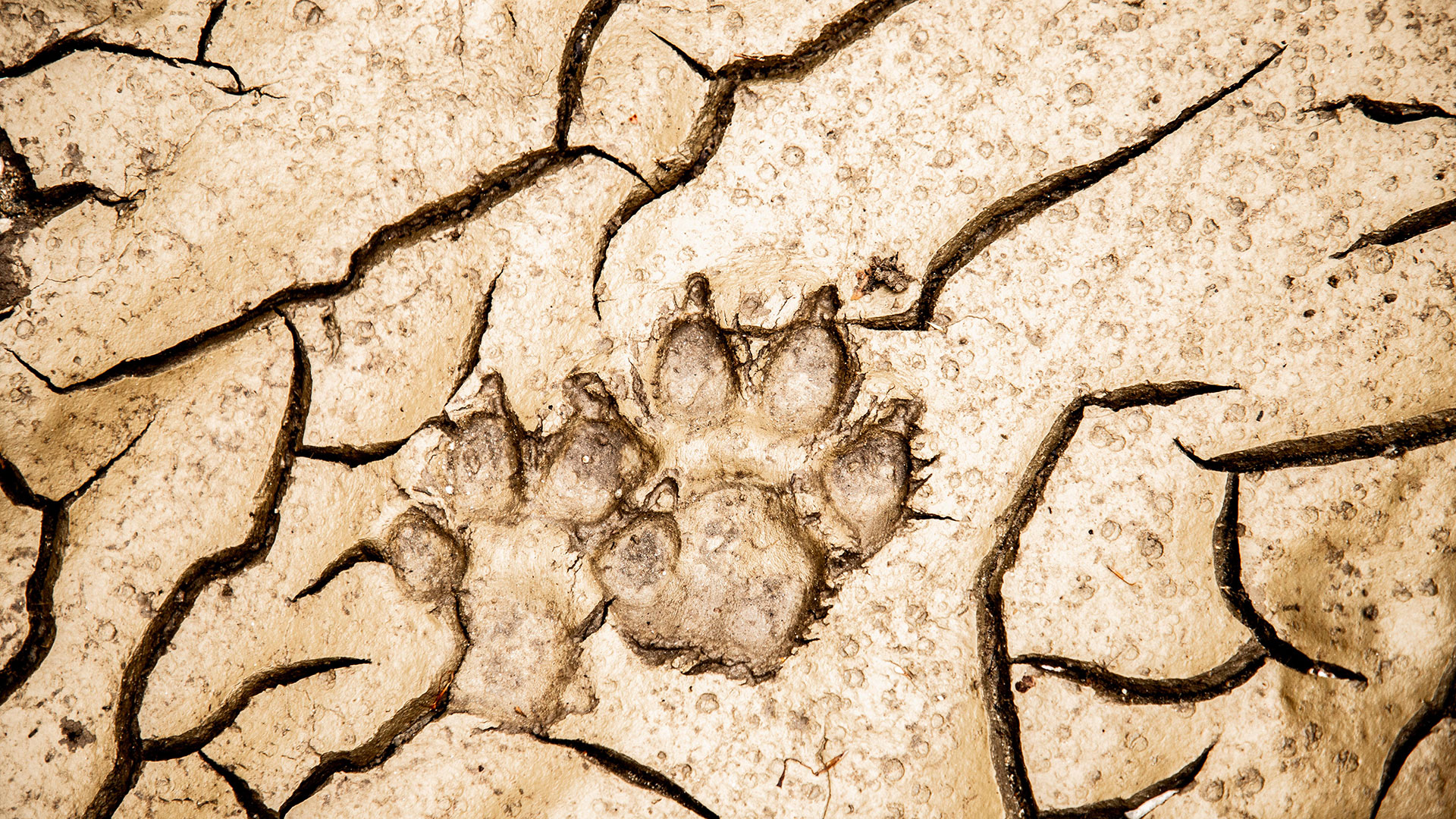 Before we left for our new objective, we took the time to have a quick visit to Brasov (Kronstadt). It was not easy to find a parking spot with the trailer behind our van, but thanks to the goodwill of some very helpful, local policemen, we probably ended up with the best in town. (And for free!)
Like Sibiu (Hermannstadt), Brasov is a town with a Saxon history, so make sure you have a weisbier. (And a visit to the Black Church if you feel like it.)
At noon we drove towards Buzau where we would camp and see some real volcanoes… Mud volcanoes that are. 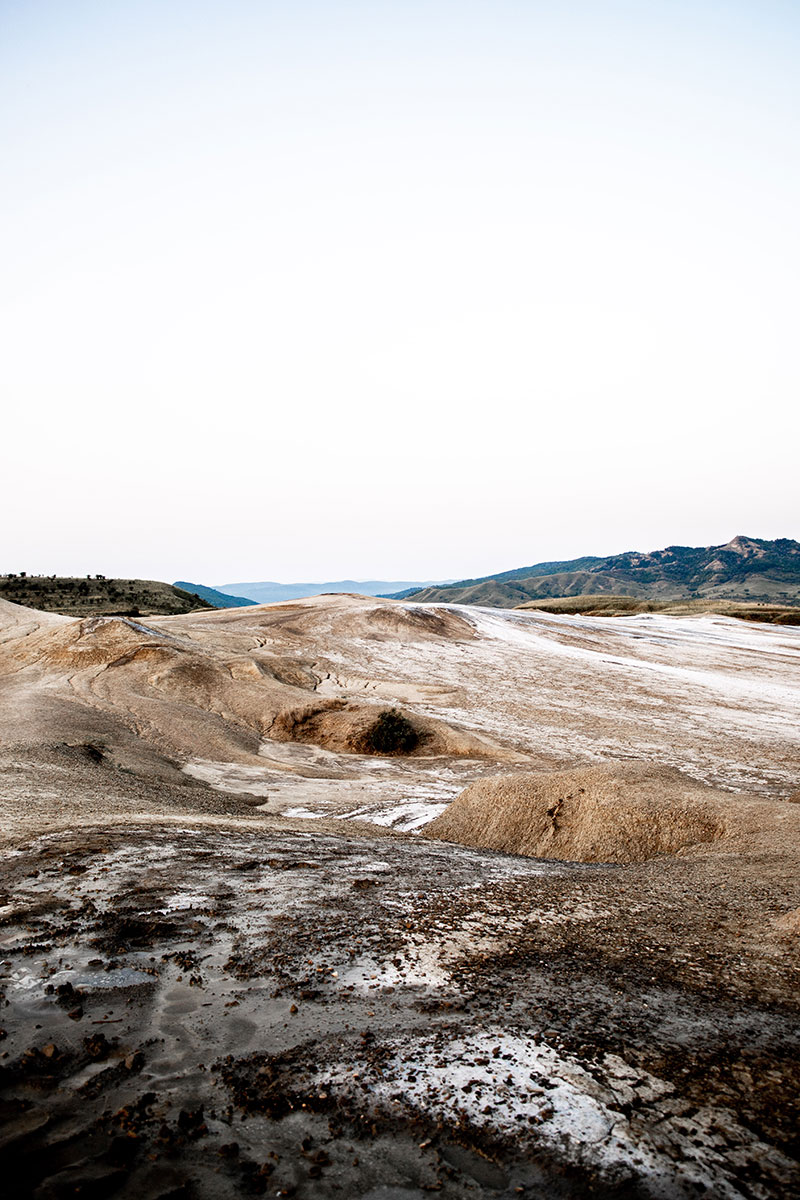 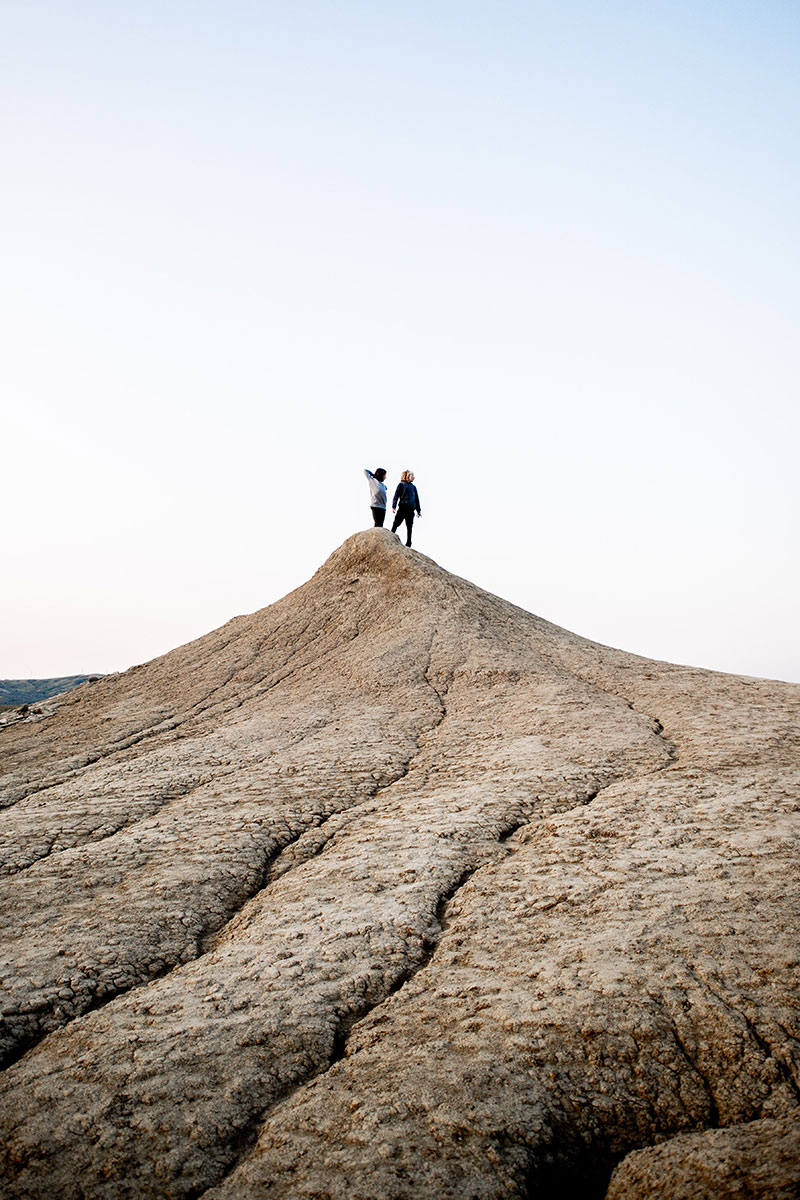 We got up at 6 o’clock and waited until sunrise. It was a beautiful and magical experience and… we were all alone. It was just the four of us enjoying running from the one caldera to the other. Mud volcanoes rock! (Actually they only stand around a bit and spit out mud, but I don’t want to split hears.)
The fact that we also saw some deer and a lot of tracks, made it even better.

The time came to visit the Danube Delta. After a horrible six hours drive and a fascinating ferry crossing, we arrived at our campsite, “Fisherman Dan”, who knows absolutely nothing about fishing. I was hoping that he was the guy who could help me with the in’s and out’s of fishing in the vast area that the delta is. But no, there were no answers here.
After some research I learned that a boat would come in handy and that I’m not allowed to boat one myself if it has to be legal. And renting a boat and some guy with it would double the price.
So we decided to take a four-day trip into the delta to Shantu Gheorghe, a place you can only reach by boat. That’s where a large canal debouches into the Black Sea and where you have a great, sandy beach. We thought we were going to some small, crappy campsite, but we ended up in some sort of resort with a bar, restaurants, bungalows and an open-air movie theatre. It almost felt like a real Club Med vacation, especially because I didn’t have to start working on the first day of school. The children had the day off and swam in the warm Black Sea.
It was fun to camp at a place like that, but only because we escaped from the high-season-hellhole it was a few weeks before. 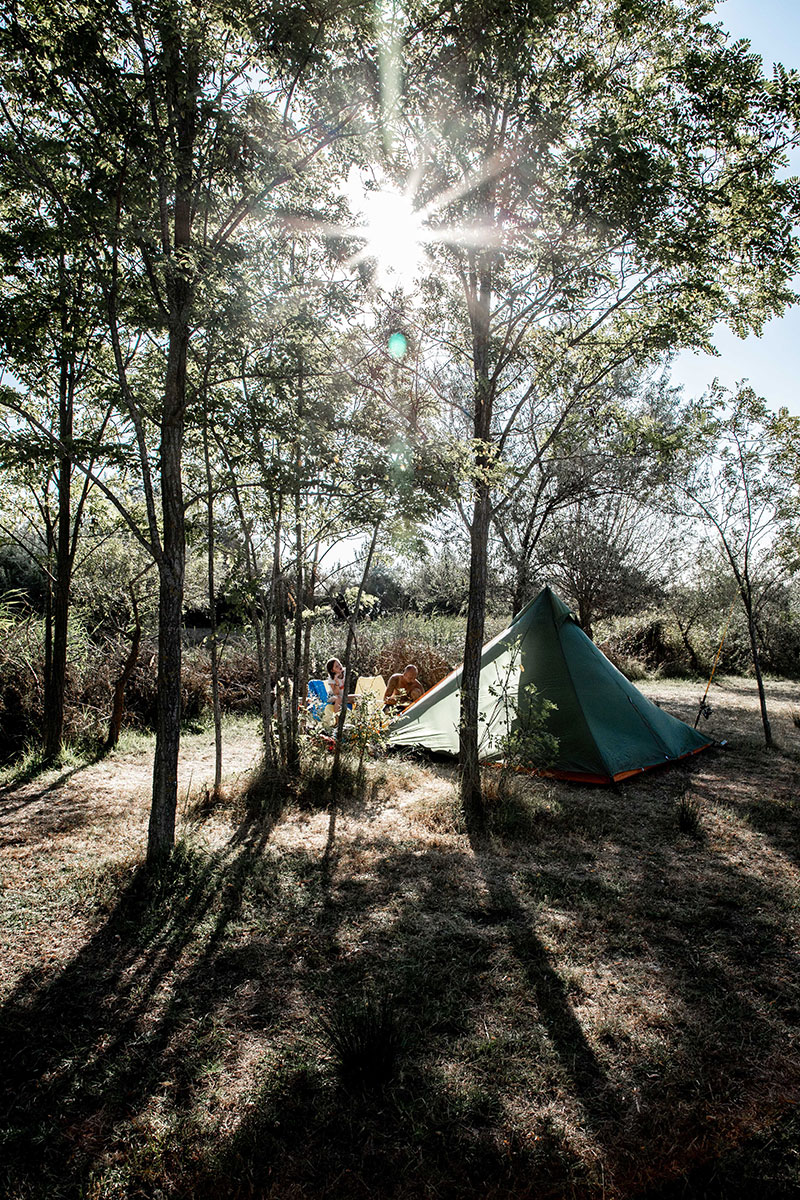 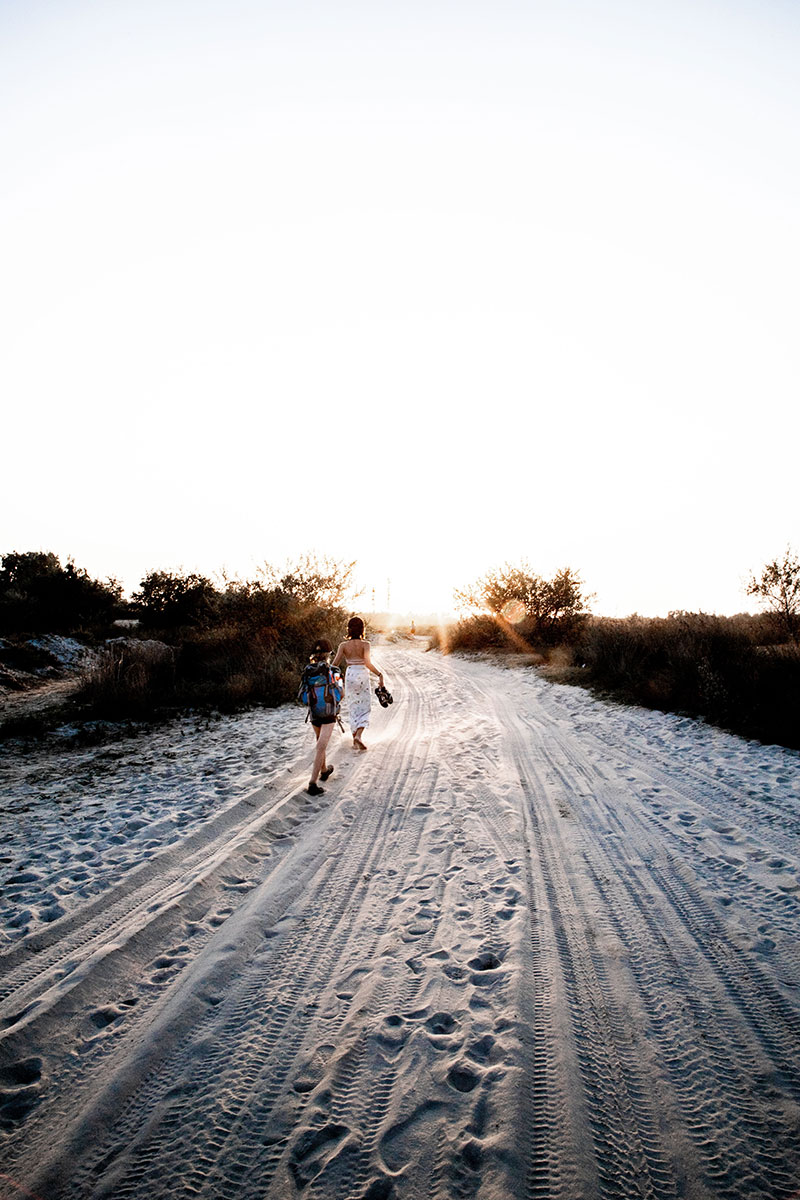 As far as fishing went, it got better.
I went out to the mouth of the Bratul Sfantu Gheorghe, where it touches the black sea and where the currents looked promising. Immediately I spotted some fish breaking through the surface but I had no idea what kind. After a few hours of experimenting I caught my first. It was aspius aspius, not the species I hoped for, but better than nothing. It was a lot of fun catching them and even more special were the surroundings. How often do you fish in a pair of swimming shorts, in the Danube Delta, knee deep in clean and warm water, surrounded by pelicans and other birds? 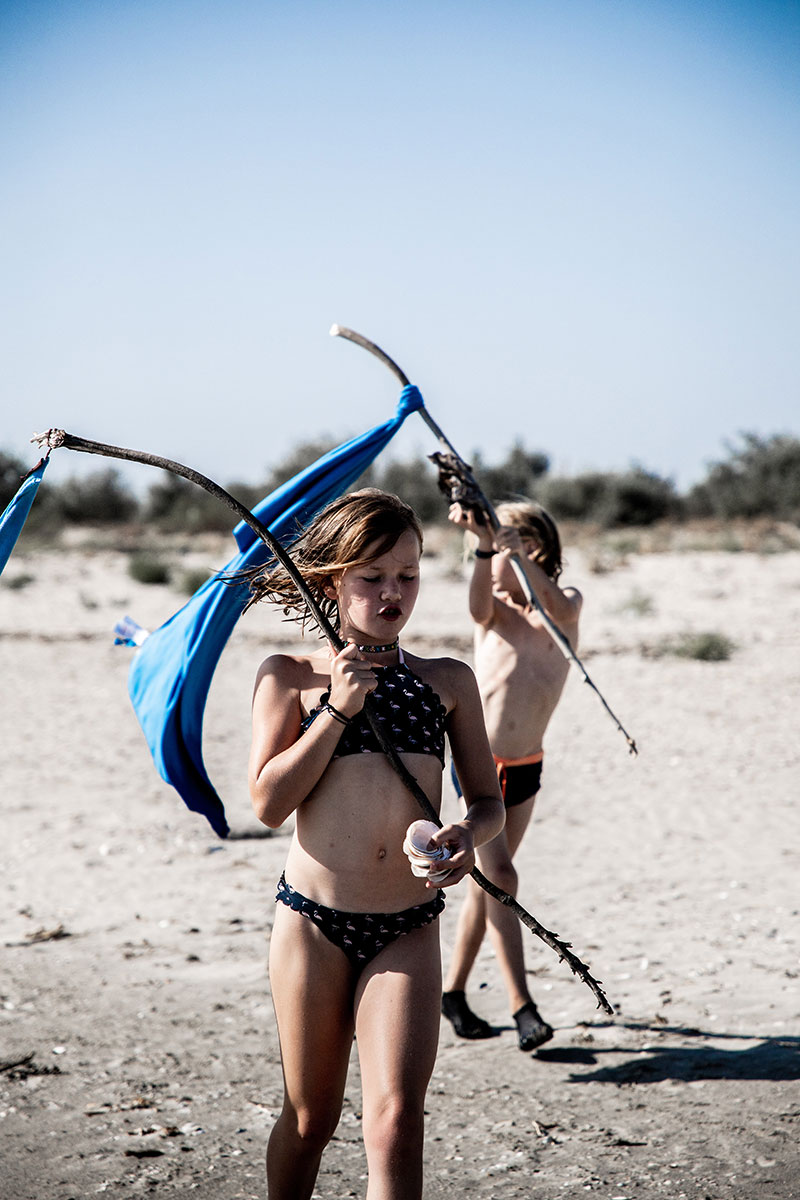 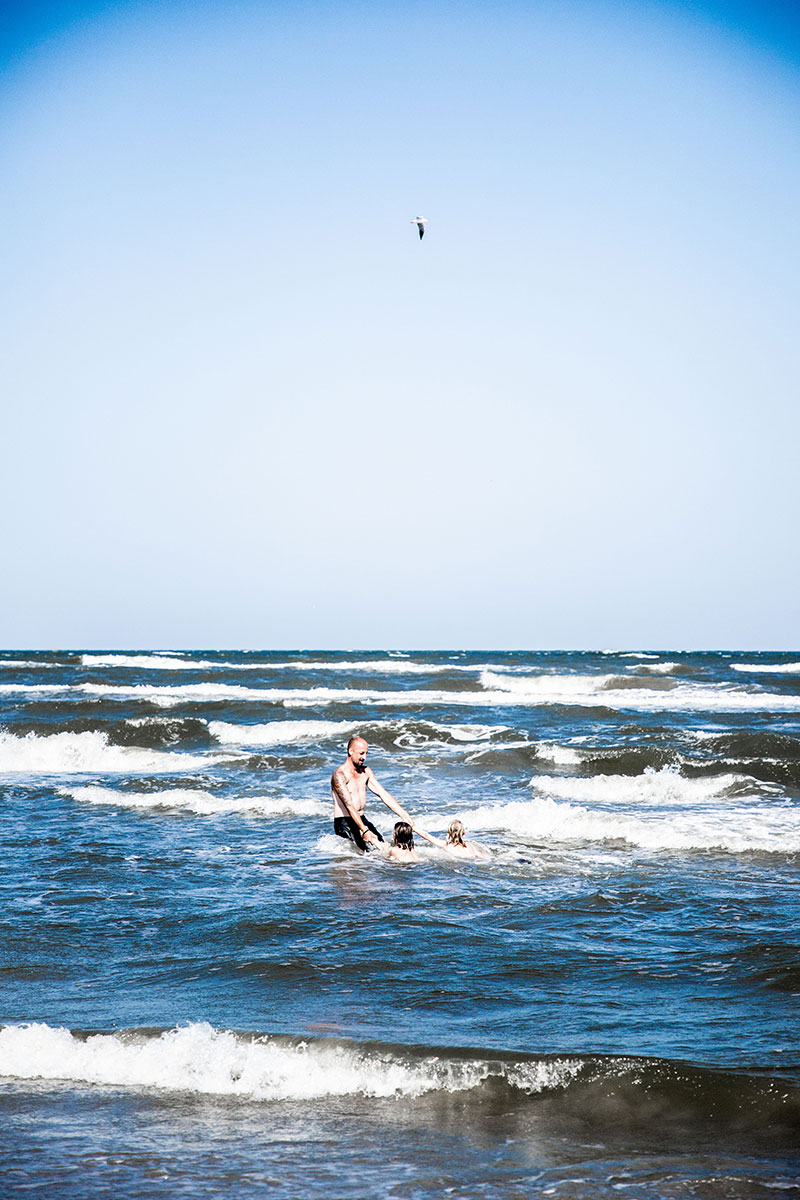 A month on the road, 4000 k driven and our Romanian part of the trip has come to an end. The mind is ready for Turkey and Georgia.
Romania has a lot more to discover and some day we’ll come back to the country where…

… all fruit is for alcohol.

… cat’s and dogs are everywhere. They mostly make great, instant pets for children, but don’t be surprised when you find yourself biking your ass off chased by a specimen with bad intentions (It happened only once, so don’t jump to conclusions). Tip, dogs on campsites or stray dogs who depend on people to beg for food, or easy going, dogs that guard something like sheep, houses or a boat, aren’t.

… “piese auto” and “vulkanisare” are the most common signs.

… a horse and chariot is a common manner of transportation.

… a rolled up t-shirt to show a hole lot of belly, is fashion.

… people know that they sometimes have a bad reputation in other countries.

… a garden is to grow stuff, lawns are a waste of space.