27 Dec The Greek empire… or is this Turkey (part one) 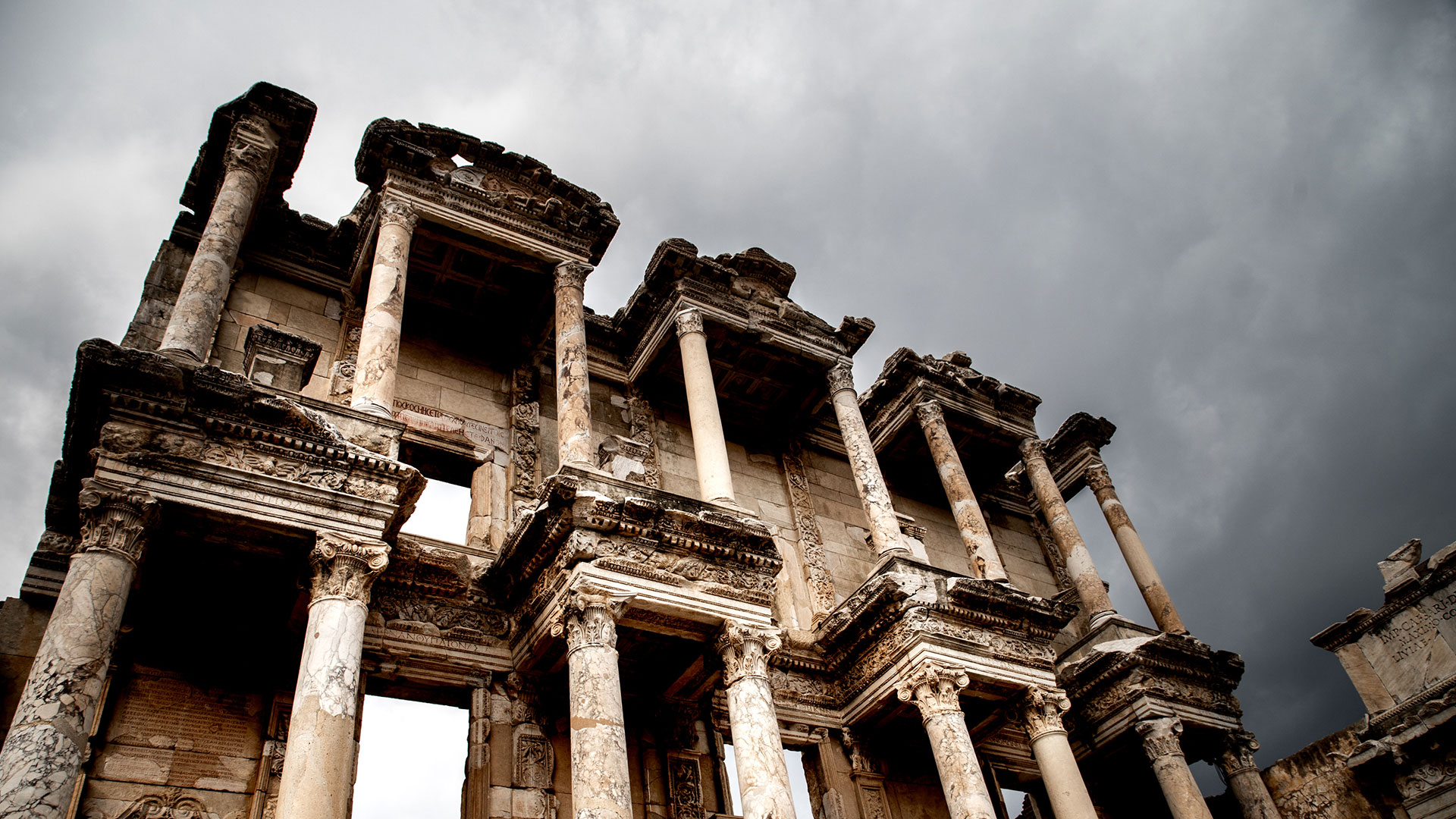 Next stop, Pamukkale, a place famous for its natural heated, calcite-laden waters coming down the mountain and creating an unreal landscape, that looks like a never melting ski slope with petrified waterfalls and a series of terraced basins. We walked up the mountain barefoot, you’re not allowed to wear shoes. It was like walking on another planet. The scenery felt unearthly that’s for sure, but the poses of others while being photographed were even more surreal.

The best part though, lies on top of the mountain, Hierapolis, an ancient Greek city that is well worth the visit. For me, as a teacher, it was a great opportunity to teach Jule and Guust about the ancient Greeks for it’s impossible to create the same atmosphere in a classroom. We walked through the city’s necropolis, picnicked at the agora and visited the temples further up the mountain to end in the ancient theatre. We really saved the best for last. The theatre is in great shape and the children immediately knew that this was something special. We all were very impressed and it was the pinnacle of our little field trip.
We wanted to end our visit with a nice swim in the hot springs, but we changed our mind about that real quickly. Once you enter the water you’re a part of the tourist attraction and you’ll be starring in lots of holiday memories.

From Pamukkale we drove to Selçuk where we had two nights camping planned. The campsite we had in mind was closed, unfortunately, but we were offered an alternative at a restaurant with a big backyard. Normally they use it to host weddings and other parties but outside the season they were glad to offer it to us. Selçuk is a small village with a great and relaxed atmosphere. It’s nothing special, but we felt at home there.
Just outside Selçuk lies Efes, another ancient Greek city that’s also worth a visit. We had to be careful for not causing an educational overload, but Efes is hard to skip when you’re in the area. Luckily it’s very different from Hierapolis. In Efes you have a genuine feeling of walking through an ancient village that is culturally and trade-wise at its peak. We walked through Efes on a beautiful, well-preserved marble road, which led us past the ancient Greek everyday life: a small private theatre, public baths and toilets, living quarters, a beautiful library, a huge theatre and of course the agora that used to be the beating heart of the town.

The region of Selçuk is also known for the cultivation of cotton, which was the reason why we drove further to Izmir.
We still have a brand to manage and while travelling new ideas pop up regularly. We planned a meeting with an agent and somebody of the textile industry to talk about our future plans. In time you’ll know what the outcome was.
Izmir is a city we knew nothing about and if we didn’t have had an appointment there we certainly would have driven by. Luckily we had some time to go out and explore a bit. Izmir is a modern and progressive city with plenty to do and see.
It is a vast city of 4.5 million people that lies between the mountains and the Aegean Sea. The old part of town, Konak, is nice to visit. It has all the typical ingredients you can expect from a Turkish city: bazars, markets, food stalls, Turkish coffee, carpets, exotic smells and… there are tons of fishing shops there. Just walk around and let it happen.
The waterfront, Alsancak, is a place where the locals meet for food, drinks and shisha or where lovers go to look at a romantic sunset.

Izmir was our last real stop in Turkey. We had to move again because we were about to meet my parents in Athens. That meant we had a 1370 k drive ahead. Two and a half days of Spotify playlists, landscapes passing by, the occasional snack, the I-have-to-pee-stop and extremely well behaved children in the back. It was a smooth ride, even at the border, we slipped through like it was nothing. I was actually a little bit disappointed. I really like the atmosphere at a border. Passport check, vehicle check, trailer check,… And still a bit nervous and relieved when you’re allowed to pass.
The five weeks we spent in Turkey were a real discovery. Before we left for Turkey, I didn’t have any idea about the country. I knew it was big and I was told it was beautiful. We did an amazing road trip there. We entered Turkey from Bulgaria and drove for Istanbul where we entered Asia, than we went west via Samson and Trabson to cross the border with Georgia, we re-entered Turkey in Türkgözü and continued our way back east again to Cappadocia. From there we drove for Ergirdir, Antalya and Izmir to re-enter Europe at Canakkale and to leave the country via Ipsala at the Greek border.
After our visit I can say that we really loved the diversity of it all. There are gigantic cities like Istanbul and Izmir that are fun to visit and where city life can be a real rollercoaster. There are vast areas of nothing except for you and the amazing scenery. There are small, authentic towns that have wonderful things to offer, things to do and to see. And of course it has plenty of sea to offer, the Black Sea, the Sea of Marmara, the Aegean and the Mediterranean. It is a country that has it all. Top that with the friendly and helpful people, some good food and drinks, excellent roads and you get the idea.

Karameşe Anadolu Köy Sofrası
Thank you for having us and letting us camp in the backyard. We will remember the kind reception and the helping hand you gave us.