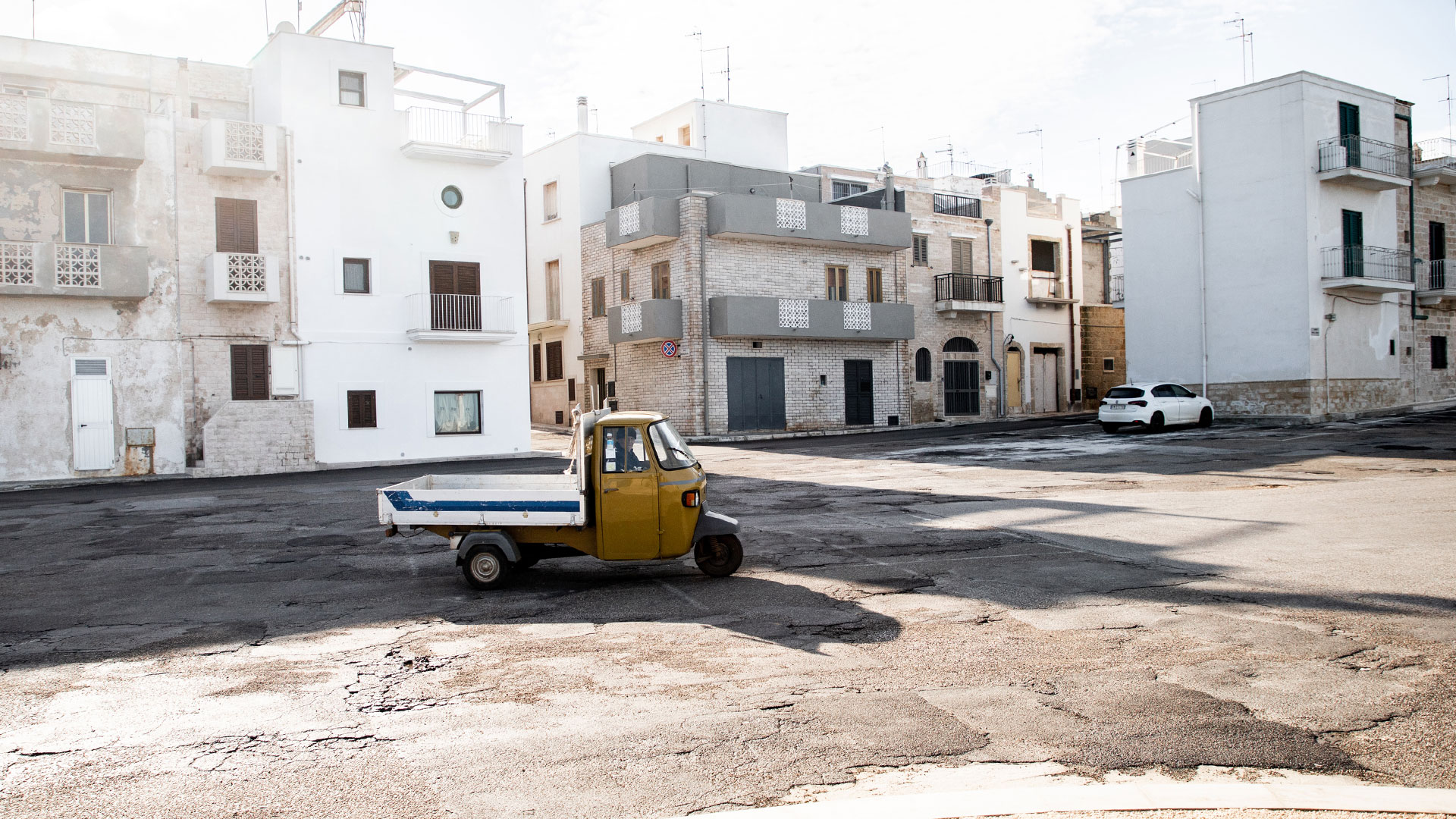 Still a bit greenish from the boat trip, we arrived in Brindisi, Italy. The first thing we did on Italian soil was buying two wetsuits for Jule and Guust. The water temperatures had definitely dropped below the-relaxed-swimming-point and there still would be a lot of beach on our way and perhaps we’ll take those surfing lessons we dream about. (probably in Portugal)
Our first stay was near San Vito Dei Romanni where we had a stay at Antonio’s, a very friendly host.
It was a great starting point to visit the region of Puglia. Ostuni, Polignano a Mare, Alberobello and Lecce, the Florence of the south, were all worth a visit.

The “how” of our trip changed that way. Our focus had shifted from almost 100 % nature to a more cultural one. It was interesting to pass through such a phase because it made us feel uncomfortable. We love the outdoors, we love to hike in the mountains and we missed it very much. Not that we needed it, but it made us even more aware of the importance of the outdoors. On the other hand, it’s not like we got bored or anything. Italy is a great country and again, like others before, a country to fall in love with.
The food is amazing, the people are very kind and interest(ed)(ing), the language is beautiful and radiates true passion, the scenery is incredible and there is so much to do and see.

From Puglia we drove to Scanzano Jonico where we booked a studio to spend Christmas in. We even had our own Christmas tree.
A trip to Matera is a must. This city, which is the cultural capital of 2019, lies on a hill as many Italian towns do and has a complex layered look. It is one of the oldest city’s in the world where people used to live in caves and where houses were build and rebuild throughout the ages. The result is a wondrous mosaic of houses, churches, stairs, caves and small streets.
We visited 7 churches that day. Not that we’re very religious people, but we very much like the Roman style churches. There you can really understand the concept of building a religious haven to pray and to contemplate. The cathedrals we know in different European city’s feel like megalomaniac projects that have nothing to do with the pure form of religion, prestige and power seem more important. I don’t like that in a religion.
The rest of our stay there, we spent some time at the beach nearby where the wetsuits were happily tested and where I could do some fishing. It wasn’t much of a success though. We went for a hike at Montalbano. The hike starts with an ancient Roman path leading down into the valley and takes you back up the steep cliff on the other side of town. The area is full of deer and wild boar, but we can only tell from the hundreds of tracks we saw.
And off course we celebrated Christmas.

For the first time ever we missed the holidays and all its festive events and that feeling would repeat itself with New Year’s Eve. Normally when we’re in Belgium, we go looking for peace and quiet in the Ardennes, but since we were already off grid this never came to mind.
Normally we use this period to get out of the rat race for only just a second and to spend time together.
This year we wished it would be the other way around. All those bloody social media posts of happiness, people getting connected and cosiness around a fire sharing food and drinks…
When you are away like we are, you truly understand how important friends and family are. 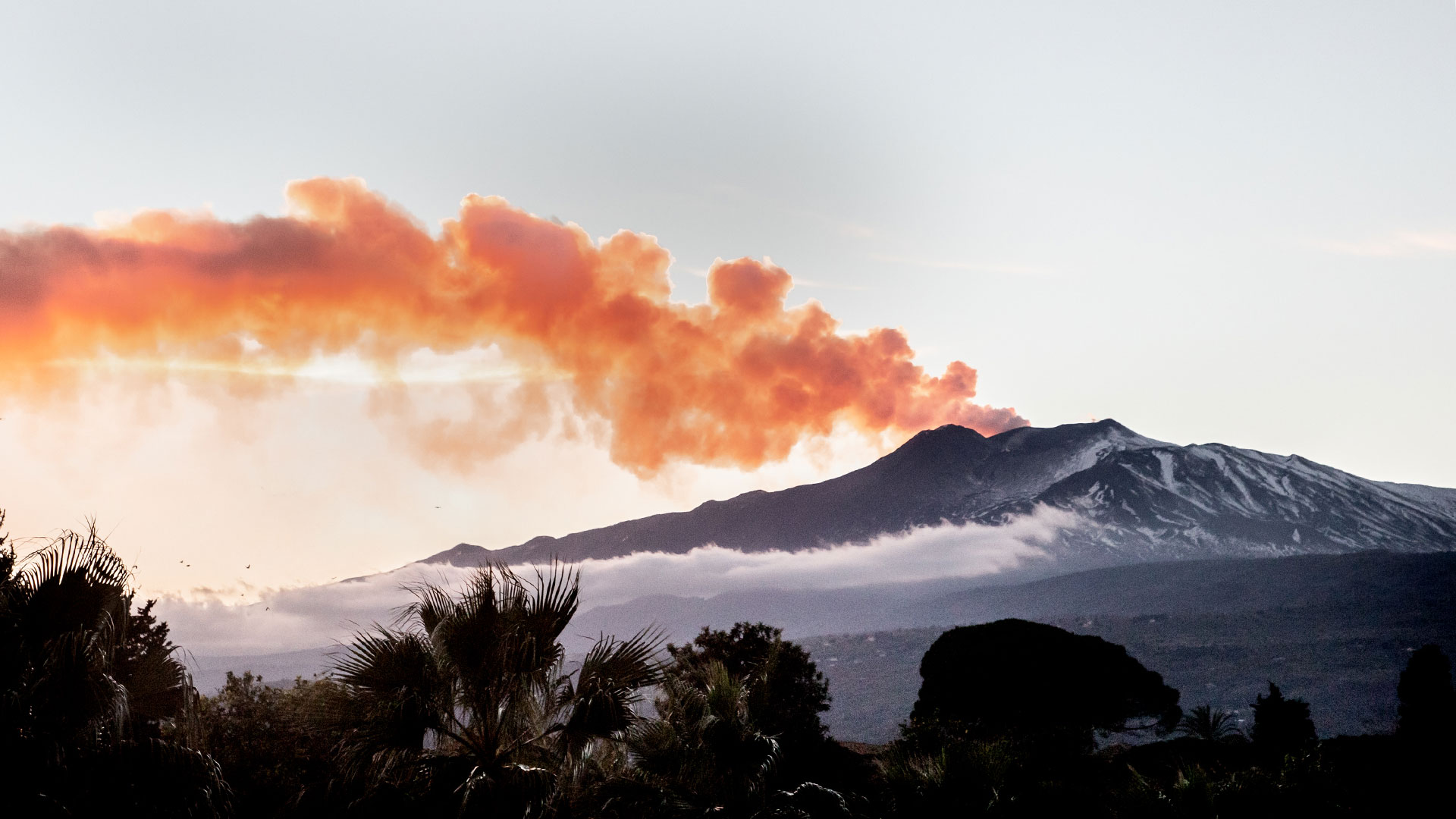 Christmas eve 2018 will be one to remember, especially around the Etna. A 4.8 earthquake shook the area up pretty good. Luckily there were no casualties but some buildings collapsed and roads were closed.
And guess what our next destination was? Yep, Fiumifreddo, some 36 k away from the spitting volcano.
Since all news reports were in (for us incomprehensible) Italian, we had no idea weather we would be able to go there nor it would be safe. We asked the friendly owner of our studio to make a phone call to check if it was ok to make the trip over there. And off course that wasn’t a problem.
It became a problem however when Facebook kindly requested that I should mark myself as “safe” to let people know I escaped from being buried under debris and ash. Did we assess the situation completely wrong?
The children were sent to their room and Katrien and I tried to reason and that was more difficult than I thought. Katrien suggested we’d leave the area but it was dark and I didn’t want to do anything rash. We decided that I would call the owner myself to ask for some more information. The man kindly told me that there was nothing to worry about and that in case of a new earthquake, we simply had to go outside and stand in the garden.
We decided to stay.

After a good night sleep we woke up relaxed and enjoyed our morning coffee and breakfast outside in the sun while looking at the impressive and smoking Etna. The anxious feeling of the day before never returned.

We did have one problem though. The Etna was closed for visitors. We booked our stay close to the Etna so we had easy access to all the hiking possibilities the region has to offer. I dreamed about the idea that I would hike all the way up to the observatory at nearly 3000 m. It would have been so cool, but hey, it’s another reason to come back to Sicily some day. (One of many!)
Our days were very relaxed. The weather was excellent so we spent most of our time outside. The beach was only a few minutes away so we did some fishing there and about that, congratulations Katrien for catching your first fish ever.
We made a trip to Riposto where we visited the local fish, vegetable and fruit market. The variety of fresh fish keeps to amaze.
And we visited Taormina, one of the most beautiful villages in Sicily, we’ve been told. The thing I’ll remember most is the excellent sunday lunch at La Botte. Great food in a lovely atmosphere.
We ended our stay with the celebration of New Year’s Eve because on January first we had something special planned.

Our visitors left for the airport and we drove for Sciacca, a small city at the south side of the island, where we resumed some of our routines like: home schooling, accountancy, design work for Katrien, writing a new peace for our blog,…
We also did some hiking at Foce dei Fiumi Platani and in the Riserva Naturale Orientata, where we walked up the Monte Genuardo. The view up there is beautiful.
We visited Sciacca’s harbour and town, the Turkish stairs and some beaches in the area.
Some fishing was done but it didn’t have the effect I was hoping for. Fishing from shore wasn’t very rewarding. At one point I saw some tuna jump out of the water, but too far and out of my reach. The adrenaline rush it gives you is amazing. I kept making cast after cast and silently hoping for a massive tug followed by an epic drill. The tug never came and the adrenaline slowly flowed out of my system.
From Sciacca we had to go back to Palermo where the ferry left for Sardinia. We had it planned just fine. We would take the expressway to Palermo and from there we would follow the signs saying “porto”. We followed the first sign, than the second and than there was none. The gps flipped and before I knew it I was driving our van and trailer through the old (and very narrow) part of town. If this had happened to me a few months before I would have completely freaked out but now I managed to stay cool and before I knew it I manoeuvred both van and trailer in the right direction.

A special thanks to those who made our trip special,

The first of januari will be remembered and cherished. Thanks Bart, Ellen, Kobe Tibo and Pippa for visiting us on Sicily.
Especially Guust is grateful for meeting up with his best friend.
(We do apologize for the crappy weather.)