28 Sep Georgian dreams and a bit of Turkish delight 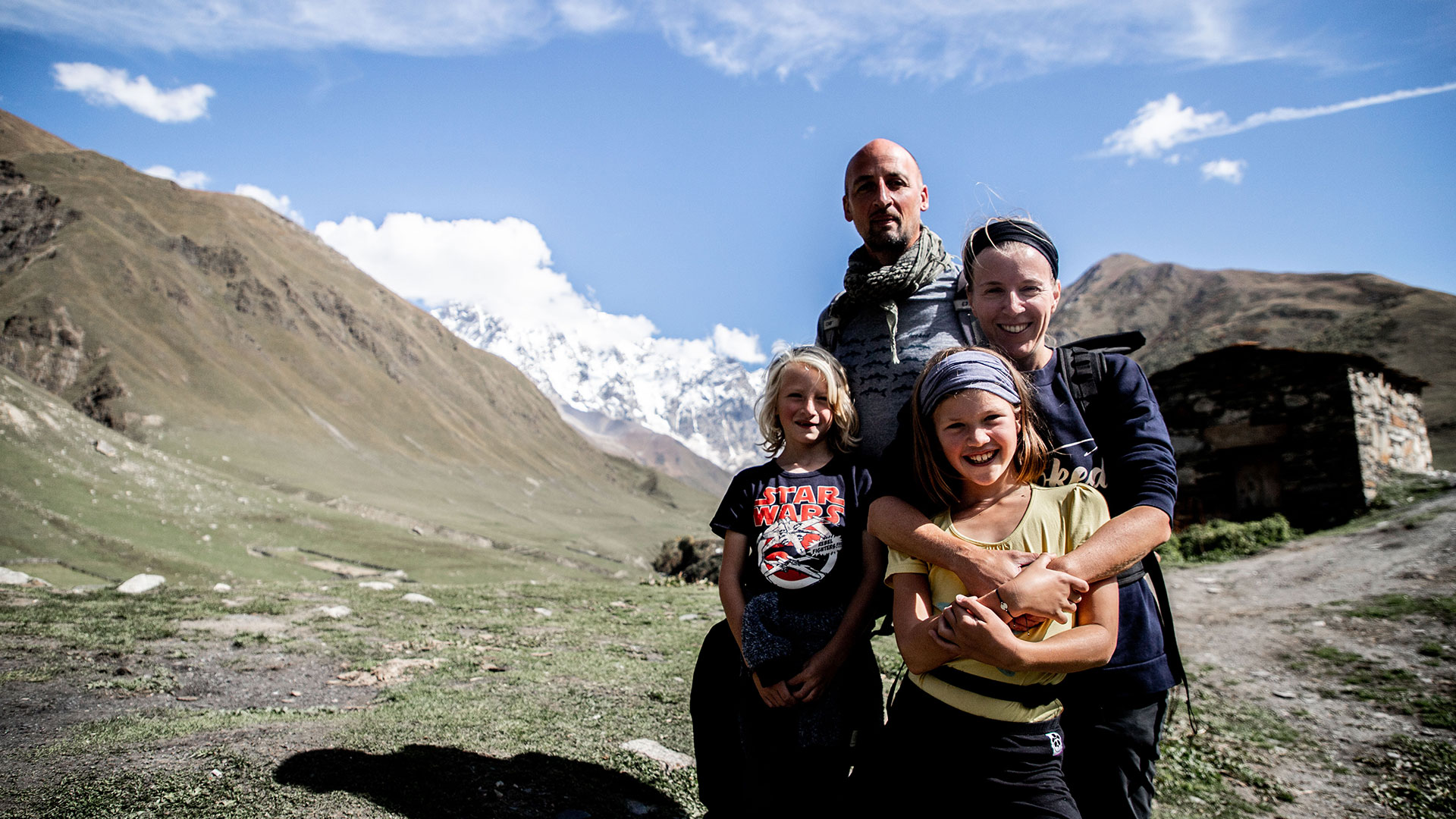 When a yearlong travel across Europe became a plan, I immediately wanted to go to Georgia. Don’t ask my why, but something about it triggered me. I think it just felt exotic and far enough away to be interesting.
So after our Romanian adventures, we started driving towards the other end of the Black Sea, to the country that will make our most eastern destination. It sounds like a deadline, which is strange when you have all year, but the earlier we get there, the bigger the chance to visit the mountains while the sun still shines and the national parks are still open.

But before crossing Turkey to Batumi (1400 k) we made a relaxing stopover in Istanbul. 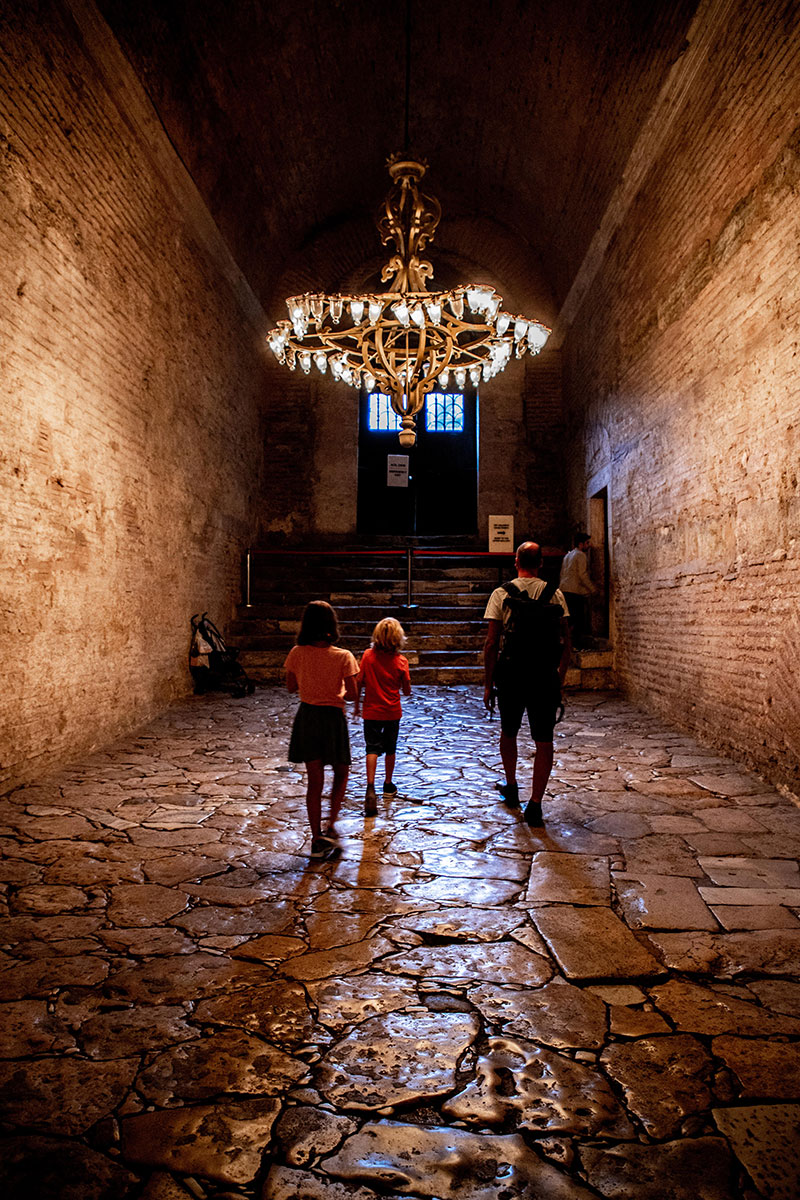 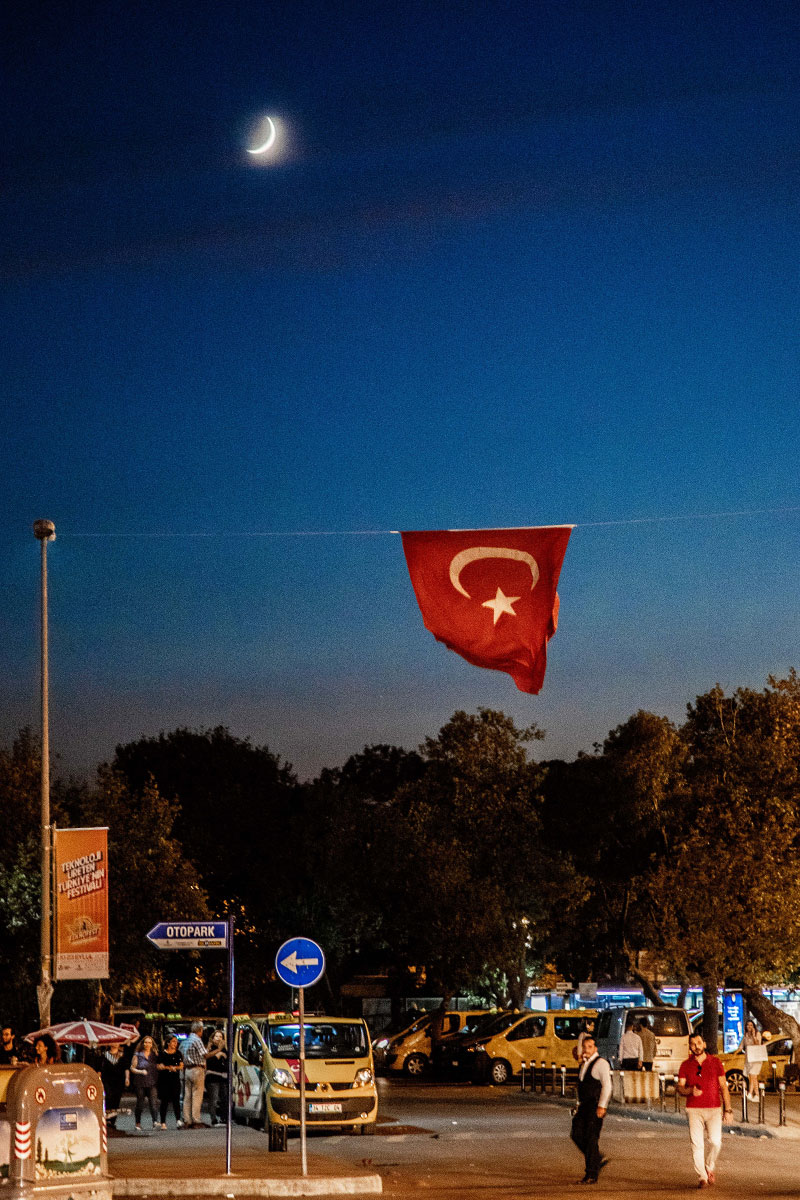 The minute we drove into Istanbul we knew we were in for a special treat. A city of 15 million people, cars and chaos everywhere and from Europe in to Asia. New smells, sounds, another language (again), different people, mosques and minarets and insane traffic. In short, a whole new world for us and a big difference in comparison to the weeks before.
Through Airbnb we rented an apartment in the Asian part of Istanbul. Two bedrooms, a bathroom, a fully equipped kitchen, a living room,… what more do you need. It was a welcome change.
Istanbul is an overwhelming place that leaves an indelible impression. The Haya Sophia, the Blue Mosque, Topcapi, the bazars, oriental smells, great taste and a perfect place to hang around and chill.
But watch out… If you ever go to a barbershop and they point at your ears… Don’t think he’s only going to shave some of the wildly growing hears on your ears. No, you know that you’re in trouble when you see him fooling around with a strange, green goo on a stick that he ends up smearing on, behind and in your ears. You’ve been waxed and it has to come off.
I assure you. There are more hears on your ears than you imagined, or at least on mine. 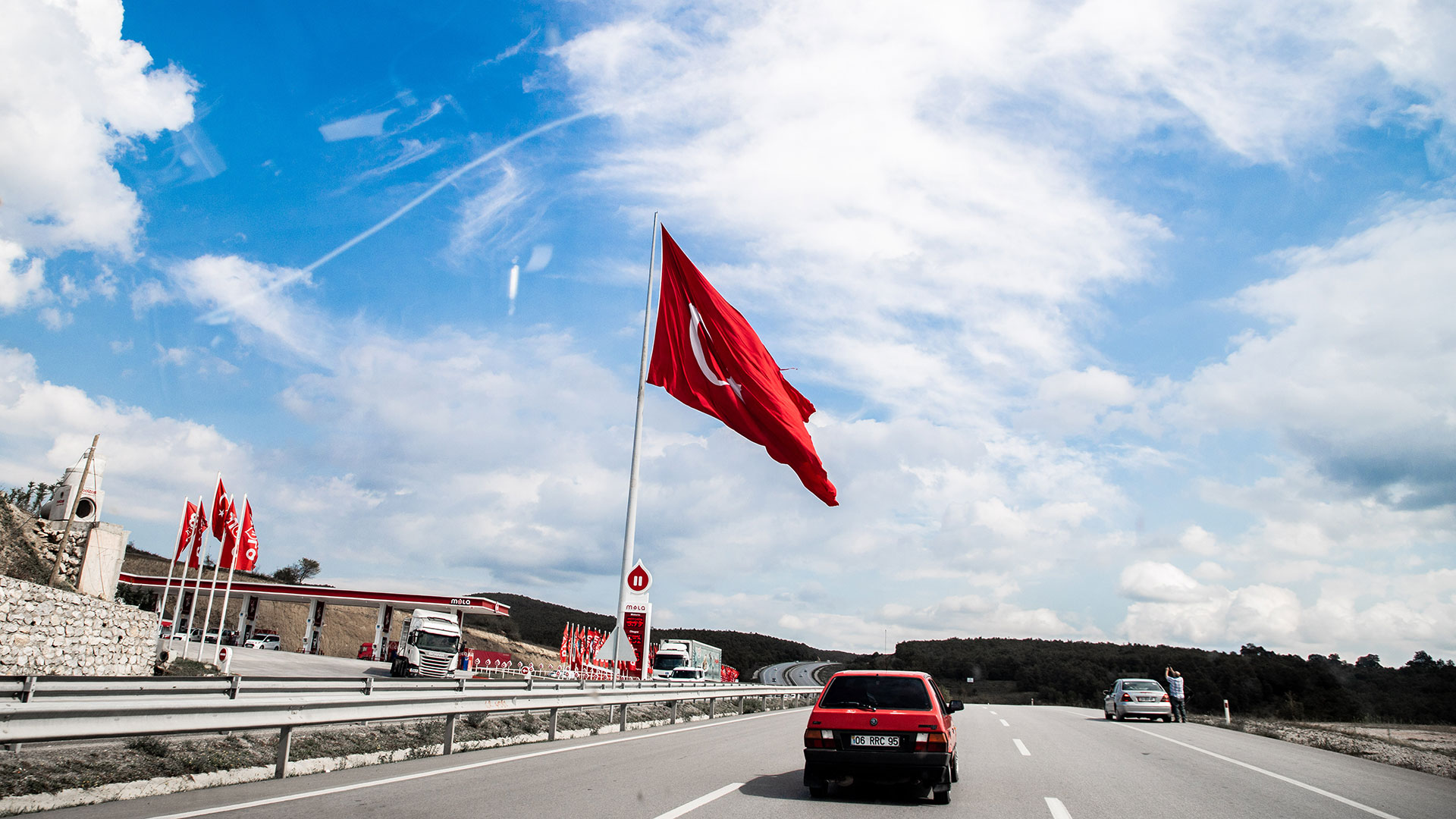 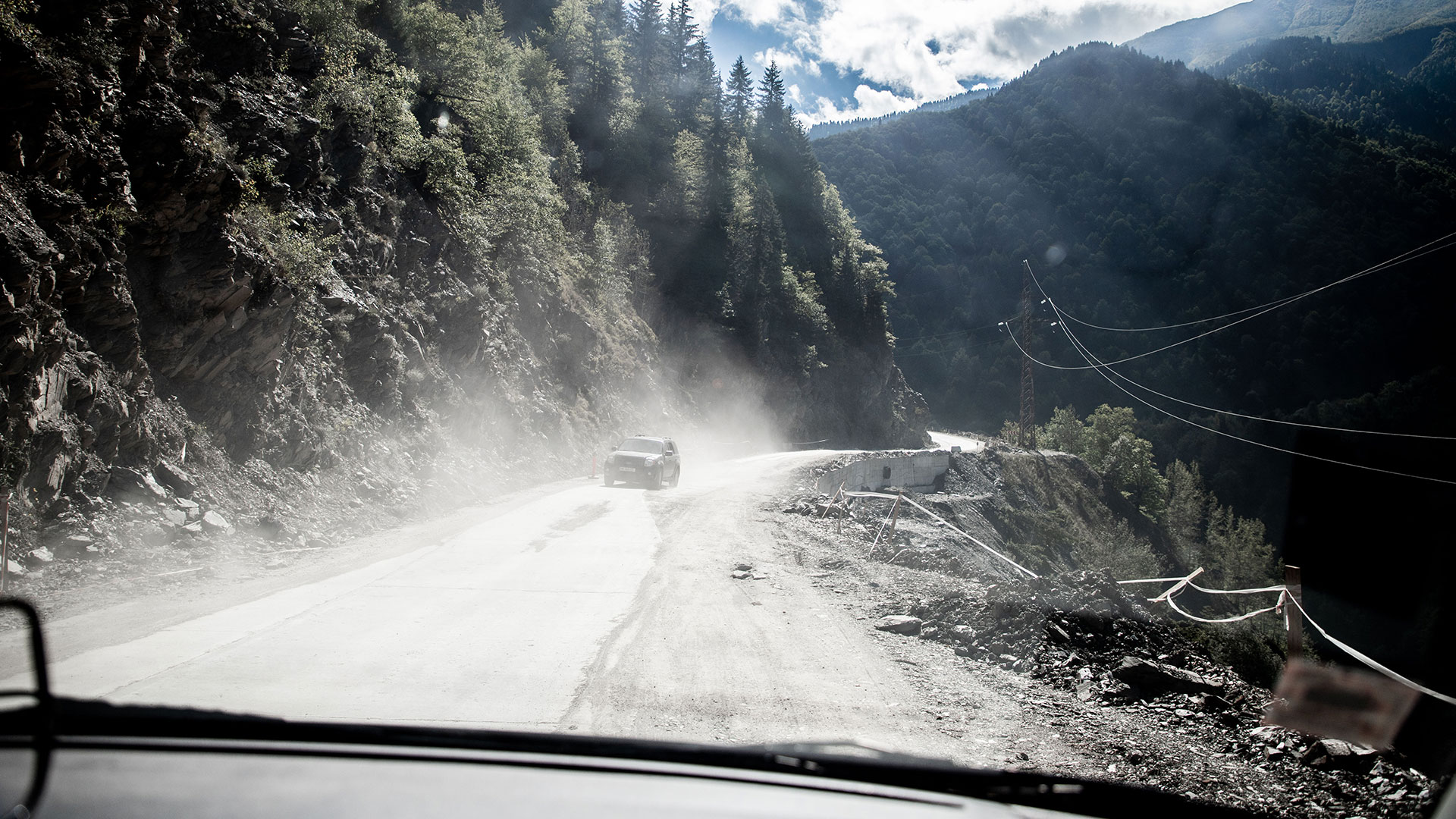 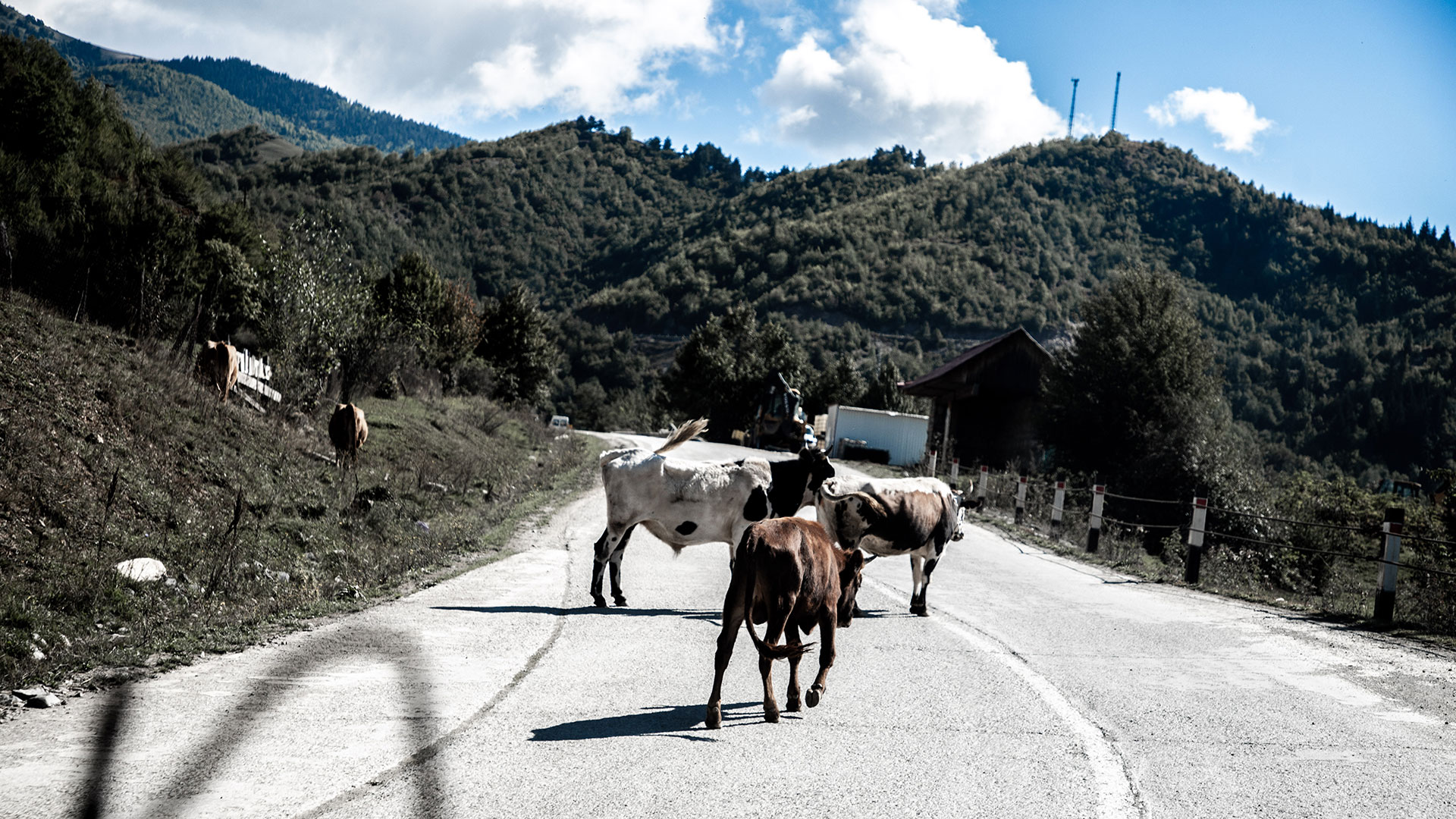 With a new haircut and baby soft cheeks (and ears) we left Istanbul and crossed Turkey from east to west. Through Samsun and Trabson we reached the Georgian border after a two and a halve day drive. We knew that we would be stuck here for at least an hour so we leaned back and relaxed. When I gave all the right papers to the customs officer and saw the frown upon his face, I knew the easy part was over.
Bringing a trailer in to Georgia without the license plate number on the inscription form (which is normal in Belgium) is a bit of a challenge. The form was checked ten times, the supervisor was informed, the trailer was checked three times, the computer system was checked another few times, I explained six times in an English/German/hand/teeth conversation, more assistance came from another officer and than we were kindly welcomed in to Georgia.
From there we drove up to the first available hotel and spent our next two days at the black sea and did absolutely nothing. Or almost nothing, Katrien made a very useful phone call with Simon from Gorgeous Trips, a Georgian travel agency. He had a lot of great tips that helped us plan our future weeks. 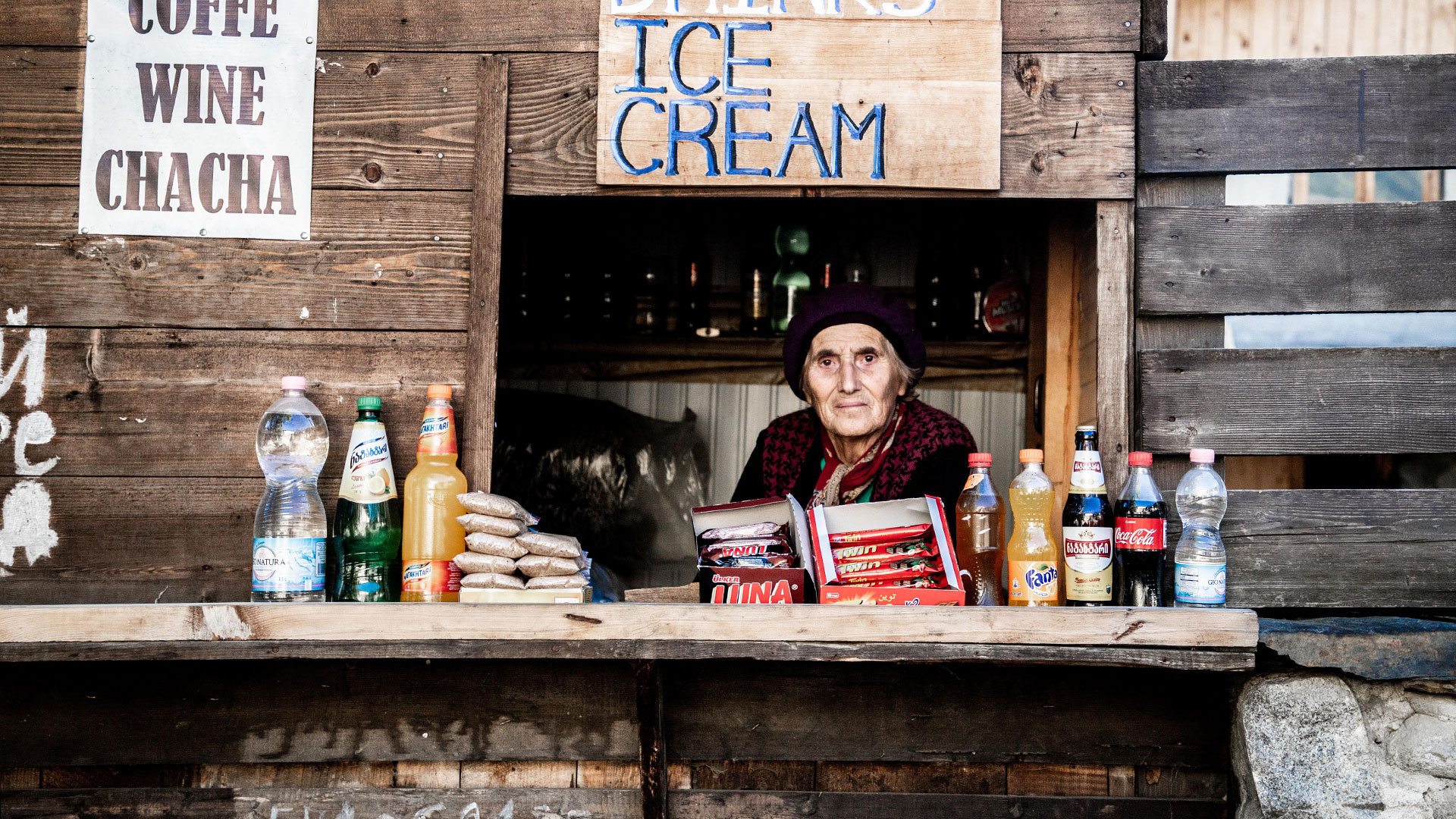 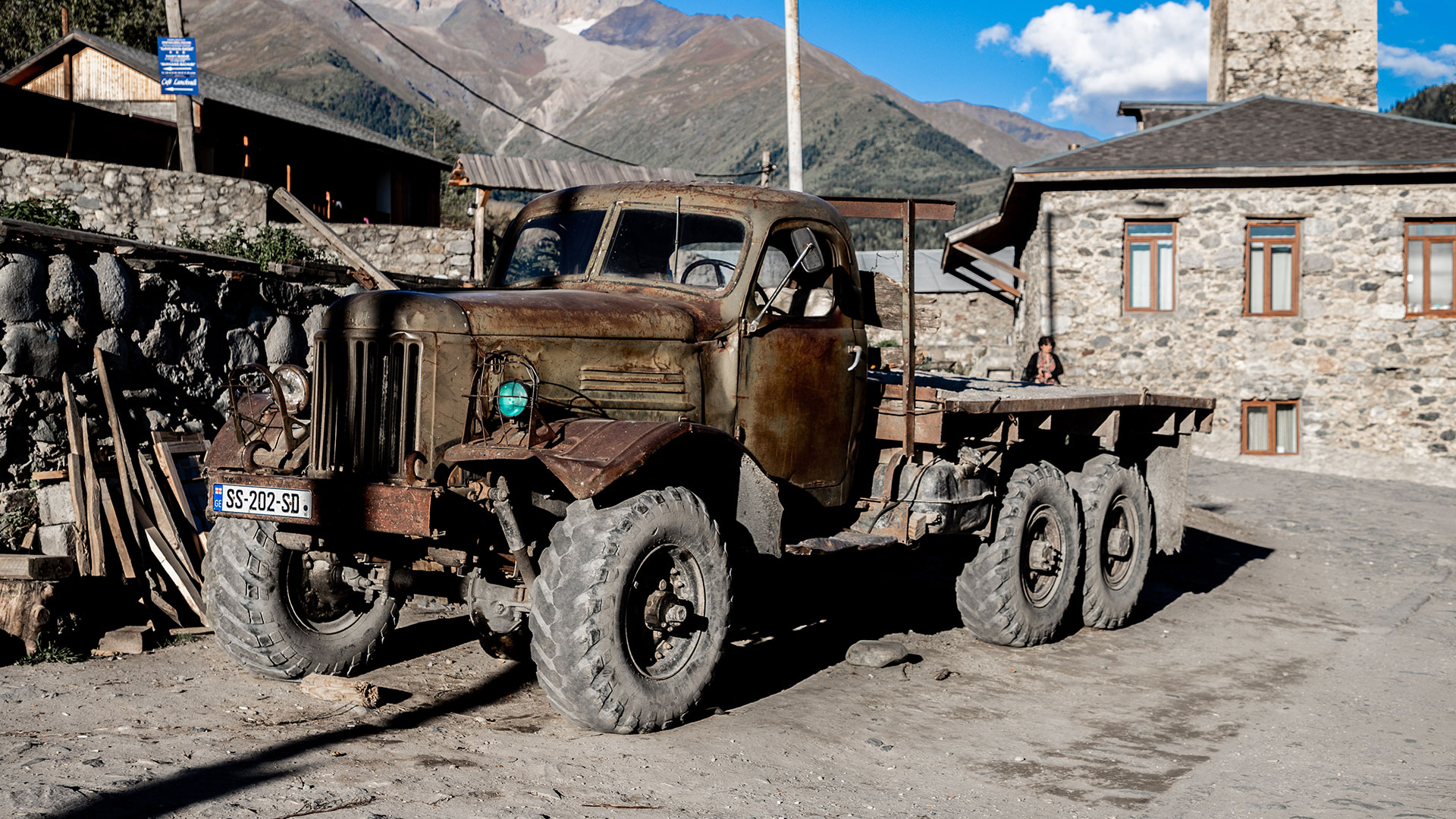 The region of Svaneti was our first objective. The western Caucasian mountains are a hikers paradise and we really needed some fresh, unspoilt mountain air.
The two hours drive up to Mestia, a small beautiful village at 1500 meters was easy. Don’t expect a smoothly paved road with only the most skilled and polite drivers behind the wheel, but nevertheless, it went without any stress or problems and the surroundings…
Mestia is a small village where the medieval watchtowers look over the old part of the town and where cows, dogs and pigs roam free around town and mountains and old Sovjettrucks and Mitsubishi delica 4×4’s colour the streets.
It’s visited by many travellers and there are plenty guesthouses and campsites so finding a place to sleep is easy. And for those who want to pitch a tent or park their van somewhere in the wild, no problem, it’s allowed. 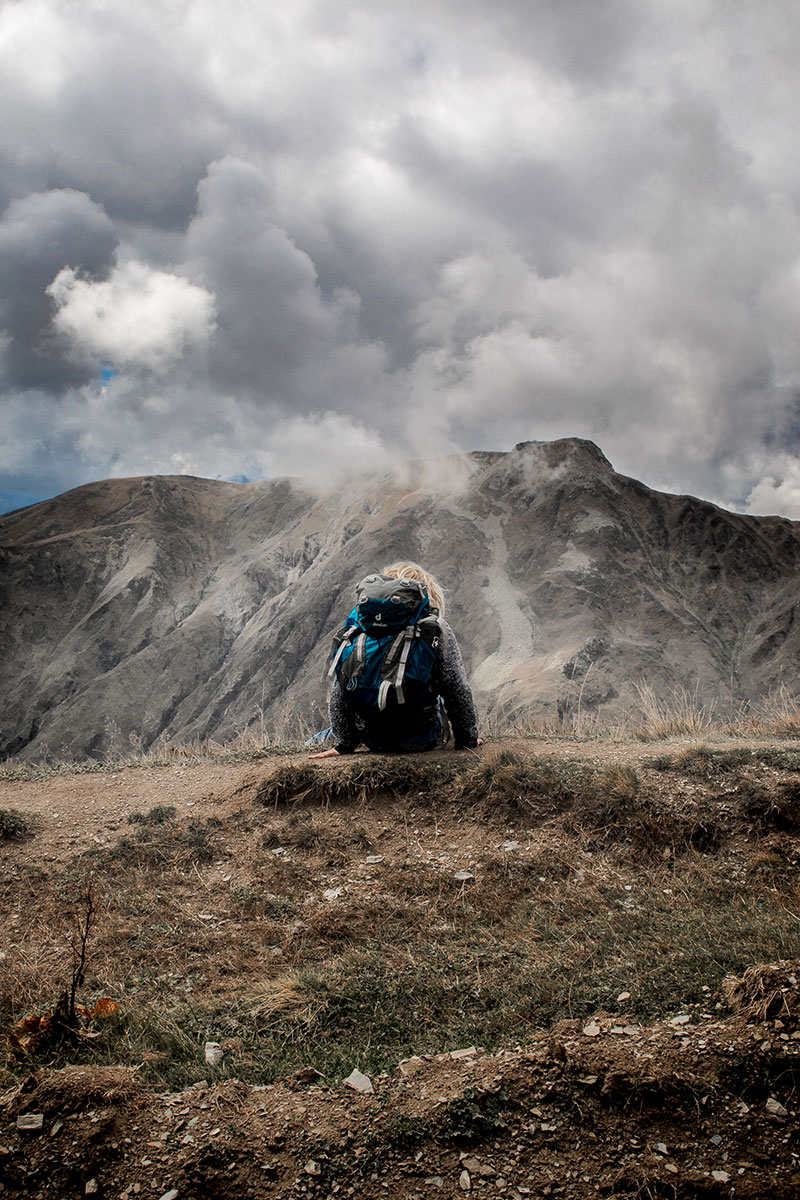 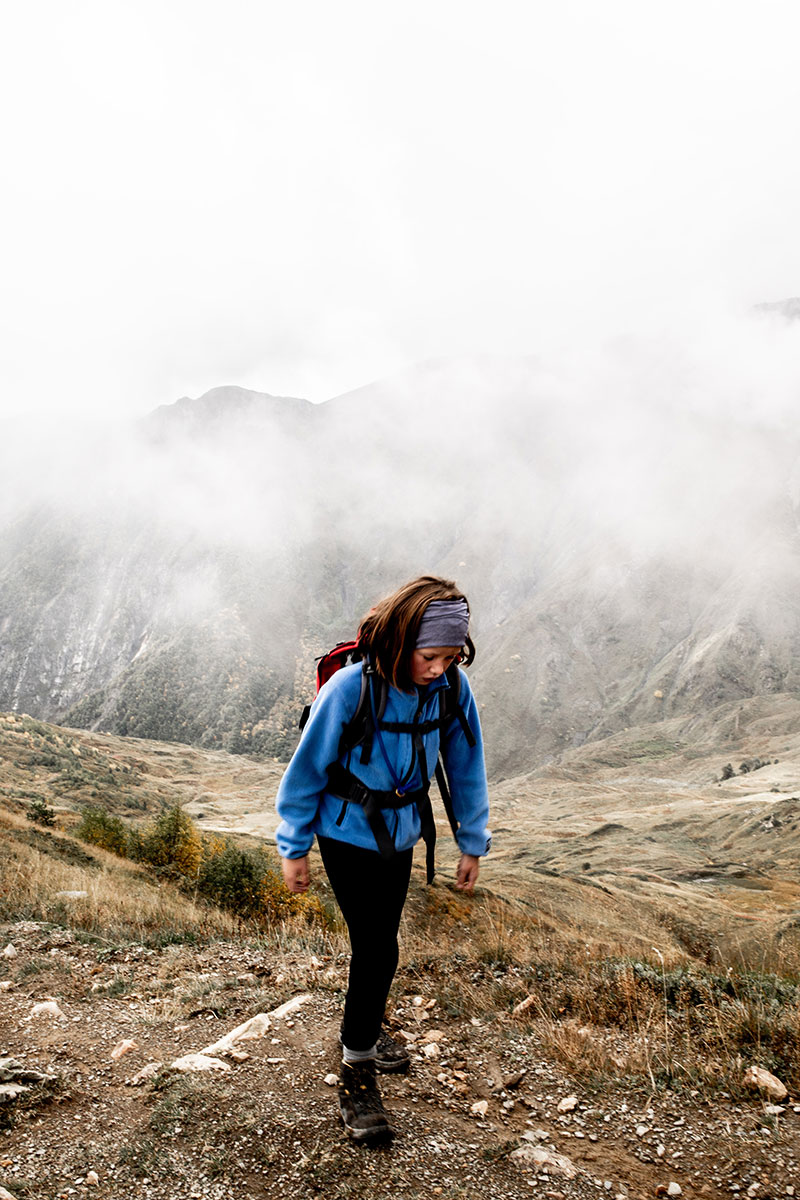 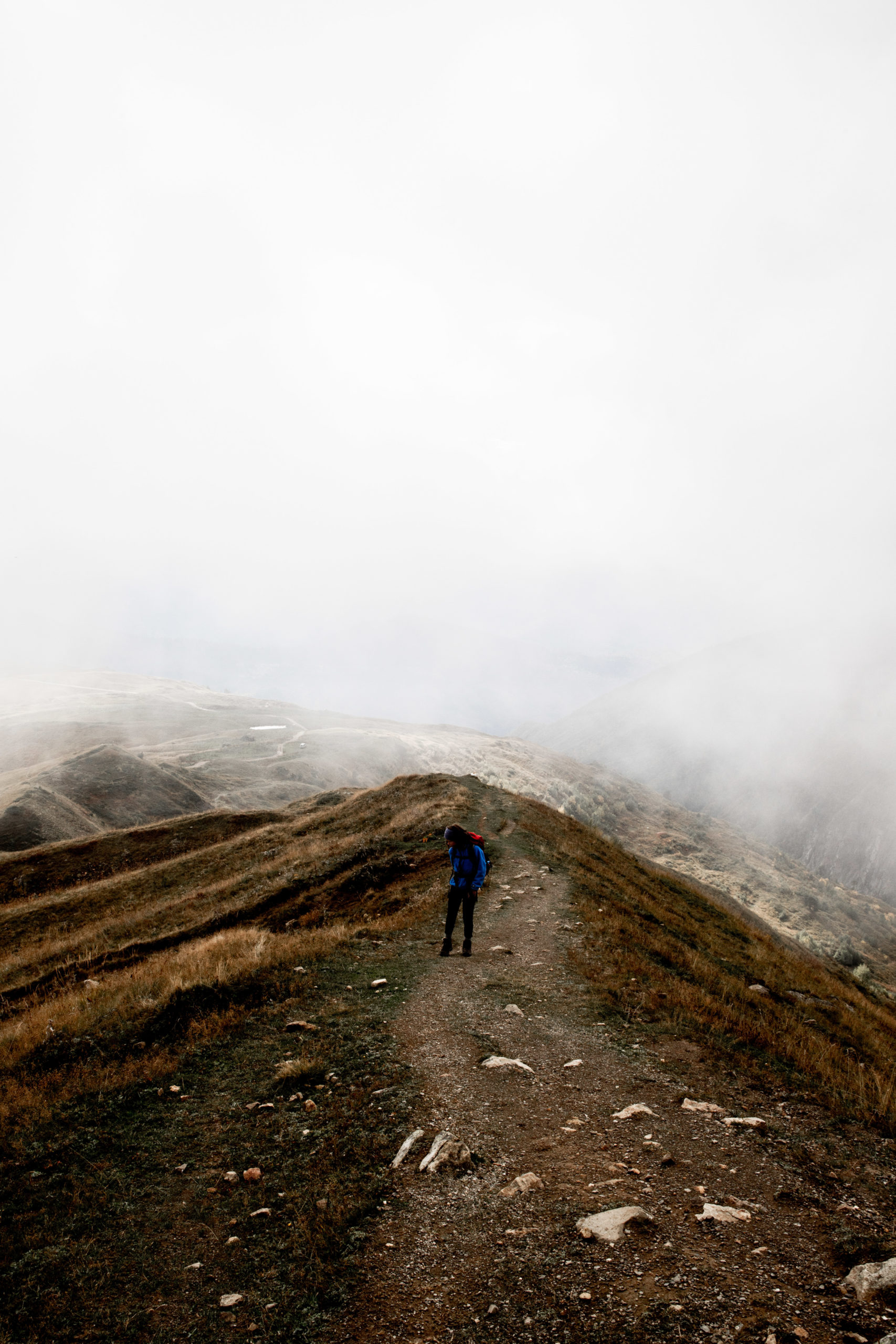 Mestia is a great place from where you can explore the region.
It’s a hikers paradise. If you want to hike for one two three or more days, the possibilities are endless.
From Mestia there is a beautiful but heavy 18 k walk up to mount Guli (2925), the red mountain, the elevation is 1440 m, but it’s worth it. The view on top of the mountain is indescribably… or at least, that’s what I was told. Clouds and mist are not conducive to wide views as we all can imagine.
I left the campsite at 6.15 and went up to the cross to have breakfast and a magical sunrise. The hike up there is steep and took more time than I planned so I missed the sunrise. I did have a nice encounter with a fox, which always puts a smile on my face.
After breakfast I walked up to the three lakes from where it took me another 50 minutes to the top. The lakes were a bummer. They look nothing like those beautiful, deep blue mountain lakes we all know, it’s more like three puddles of muddy water of which you wonder if they even deserve the title, “lake”.
From there everything got magical, despite the low visibility. A small, single track took me around the mountain and than to the top, crossing two small rivers and following the steep mountain flank. The mist made it impossible to see how far down it goes, but I was careful enough to stay highly focussed.
The hour I spent on top of the mountain was the biggest reward possible. Although it was mostly misty, the clouds were constantly moving and they slowly revealed small parts of the mountains, even the two-peaked Mount Ushba (4700).
I never saw the entire picture, but who gives a crap when he’s sitting on top of a mountain, in complete silence, peace and solitude overthinking past, present and future. 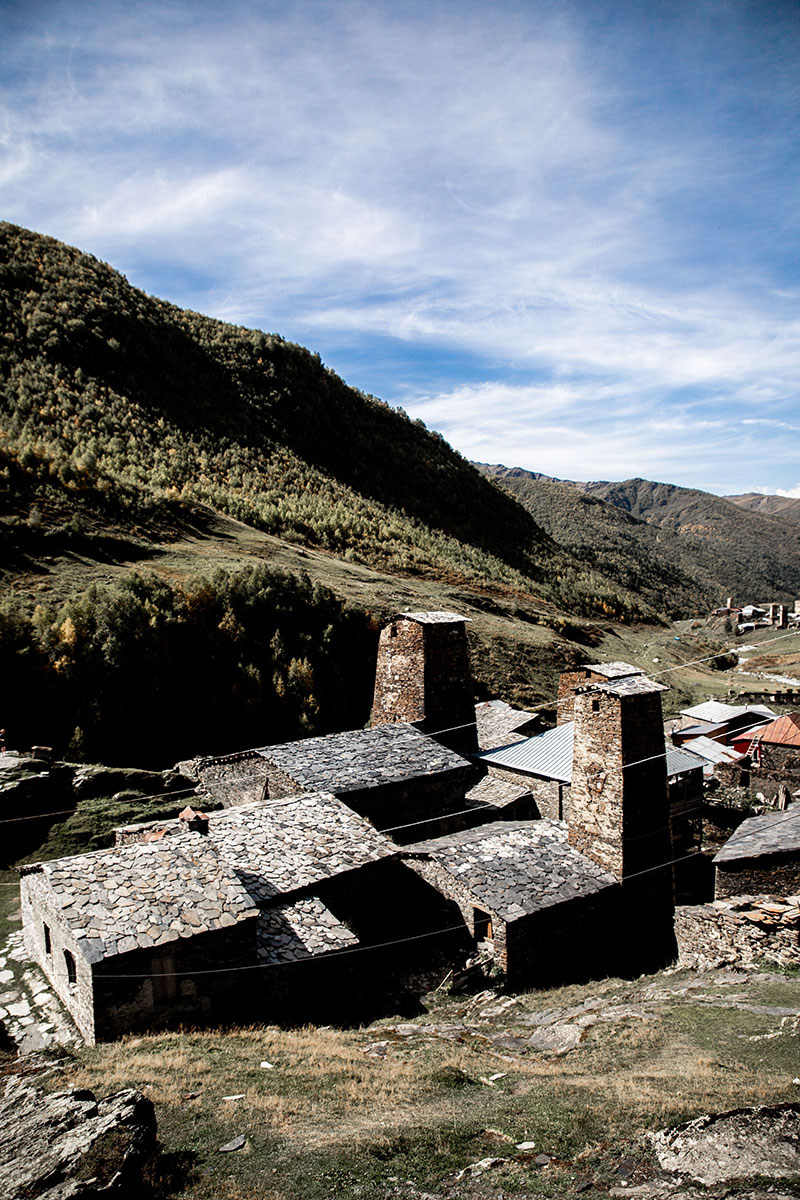 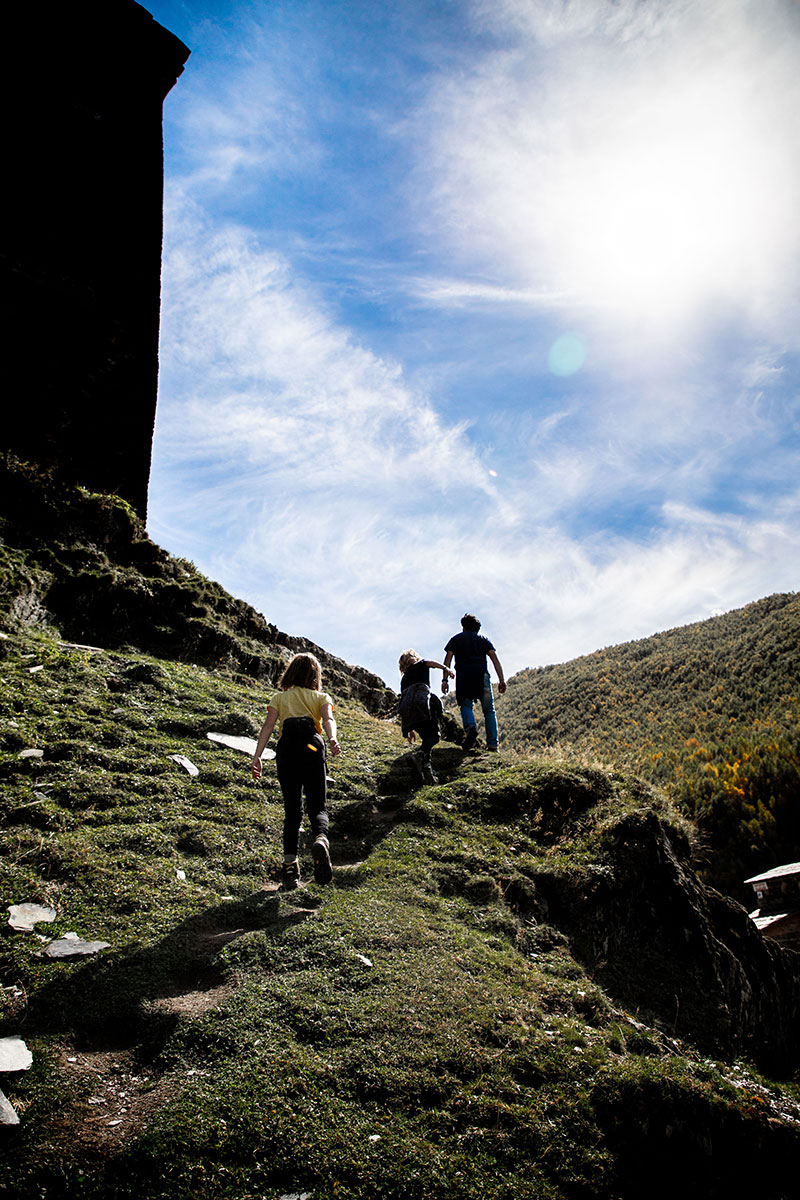 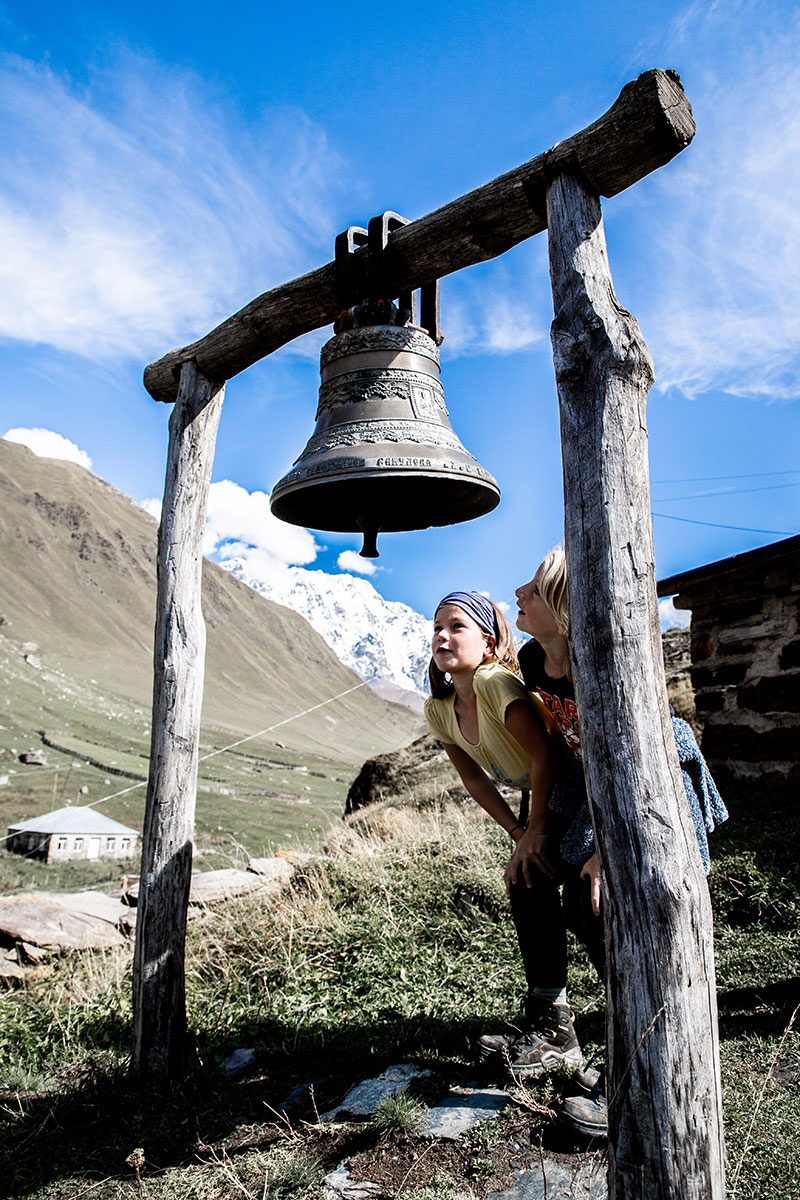 We also wanted to visit Ushguli, a small and the most remote European village (according to some) that lies at the foot of Mount Tetnuldi, the highest Georgian and one of the highest European mountains (4858). And… it’s Unesco World Heritage. Damn, “Supervillage” or “Mighty Town” really exists.
For this we arranged a ride in a 4×4 and the son of the campsite owners, Davit, was our driver/guide.
Ushguli is a small, well-preserved medieval village that before twenty years never saw outsiders. Now it’s a well-known place that attracts its daily portion of tourists.
In medieval times, separate clans that lived together in the valleys dominated the region, they mostly co-existed but they also fought bloody clan wars. The watchtowers were easy-to defend-strongholds and perfect to keep an eye on each other.
Nowadays the watchtowers are spared from bloody battle (we were told) and make a distinctive landmark that dominate the small Svaneti villages and give them there characteristic look.
It’s a village worth visiting and since they are building a better road up there it will be better accessible in the future. If that’s a good thing? 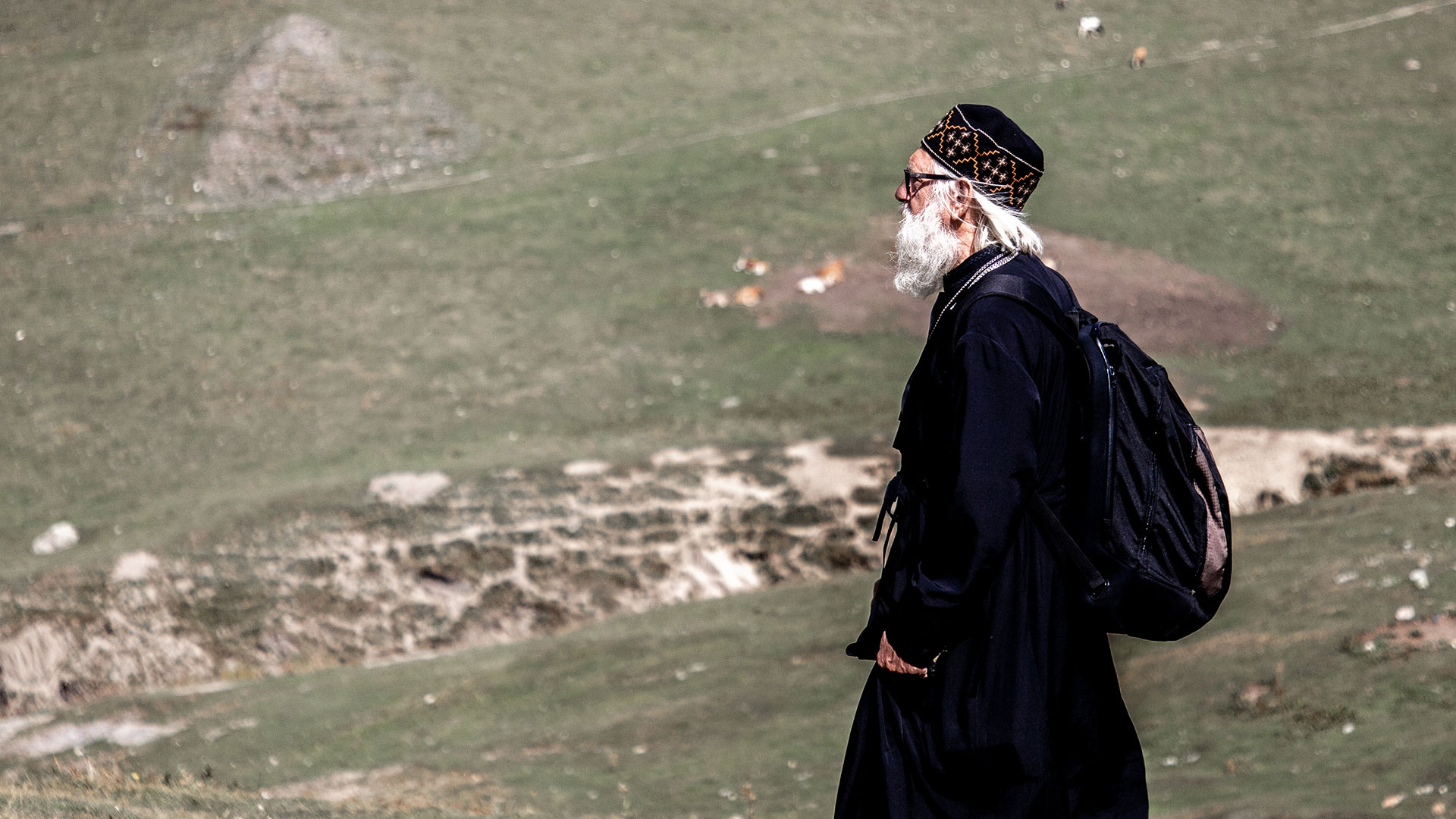 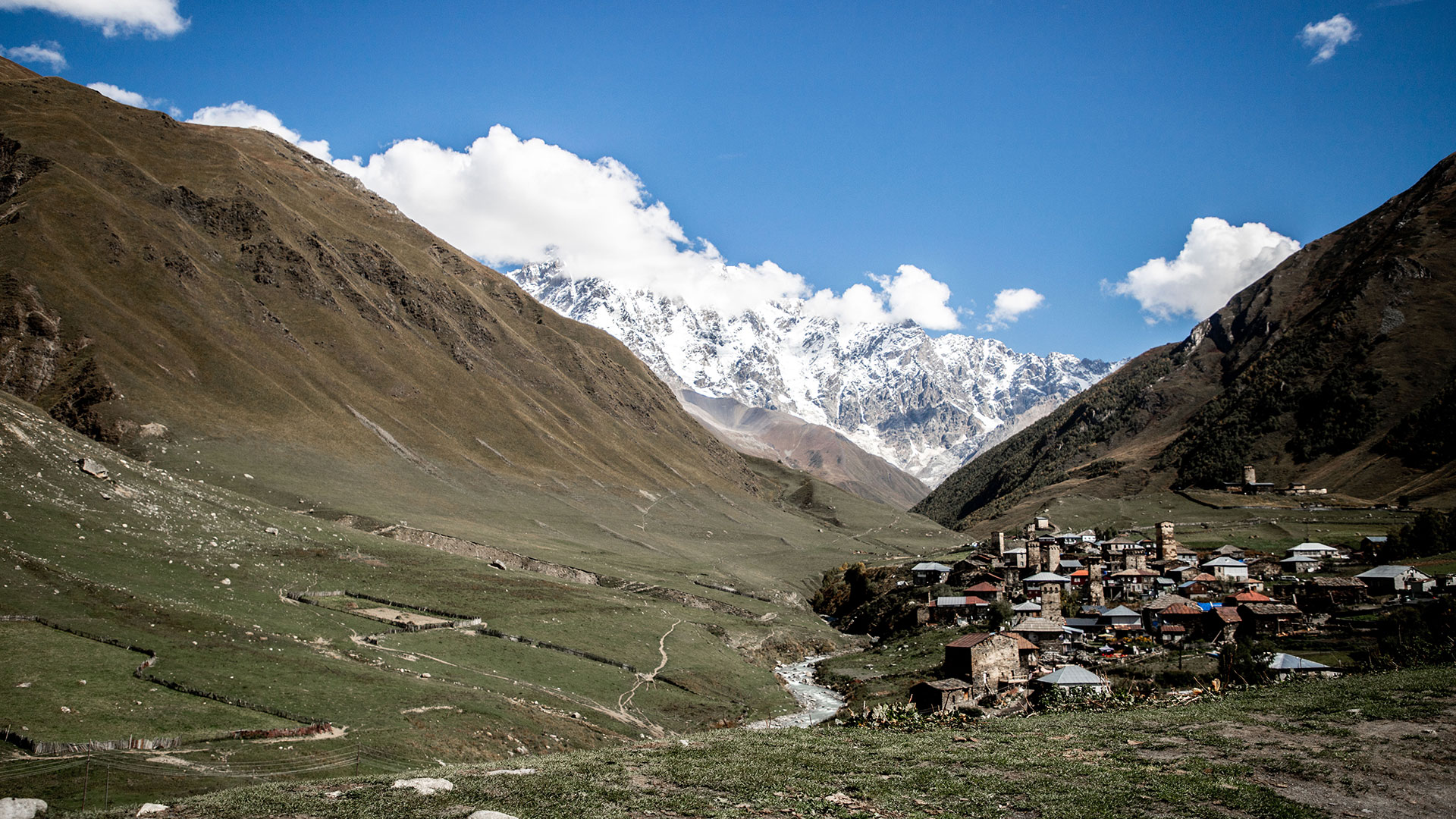 So far our Georgian stay has been great. The weather is perfect, the surroundings breath-taking, the food exquisite, the people couldn’t be more friendly and we’re having the time of our lives.
We count our blessings and realise that we are privileged. Our decision to leave home and travel was the best we ever made.
And we’re only gone for seven weeks and 6000 k away from home. 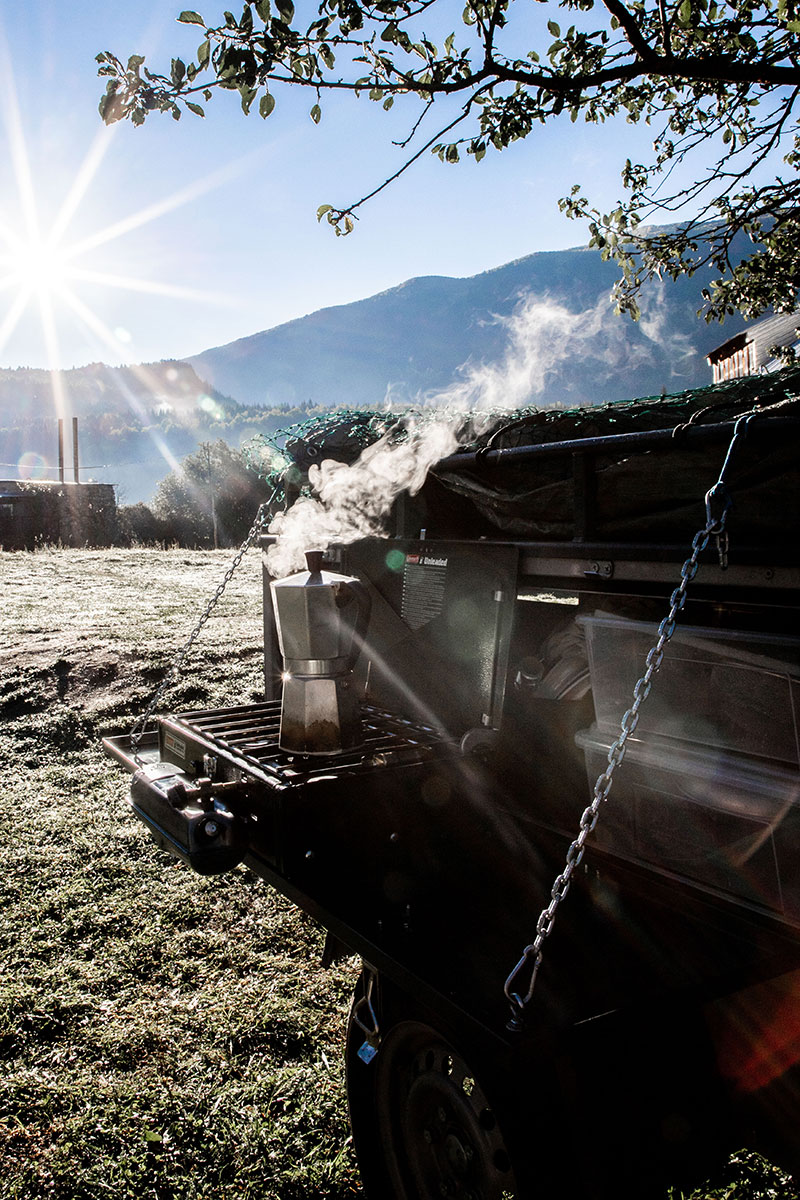 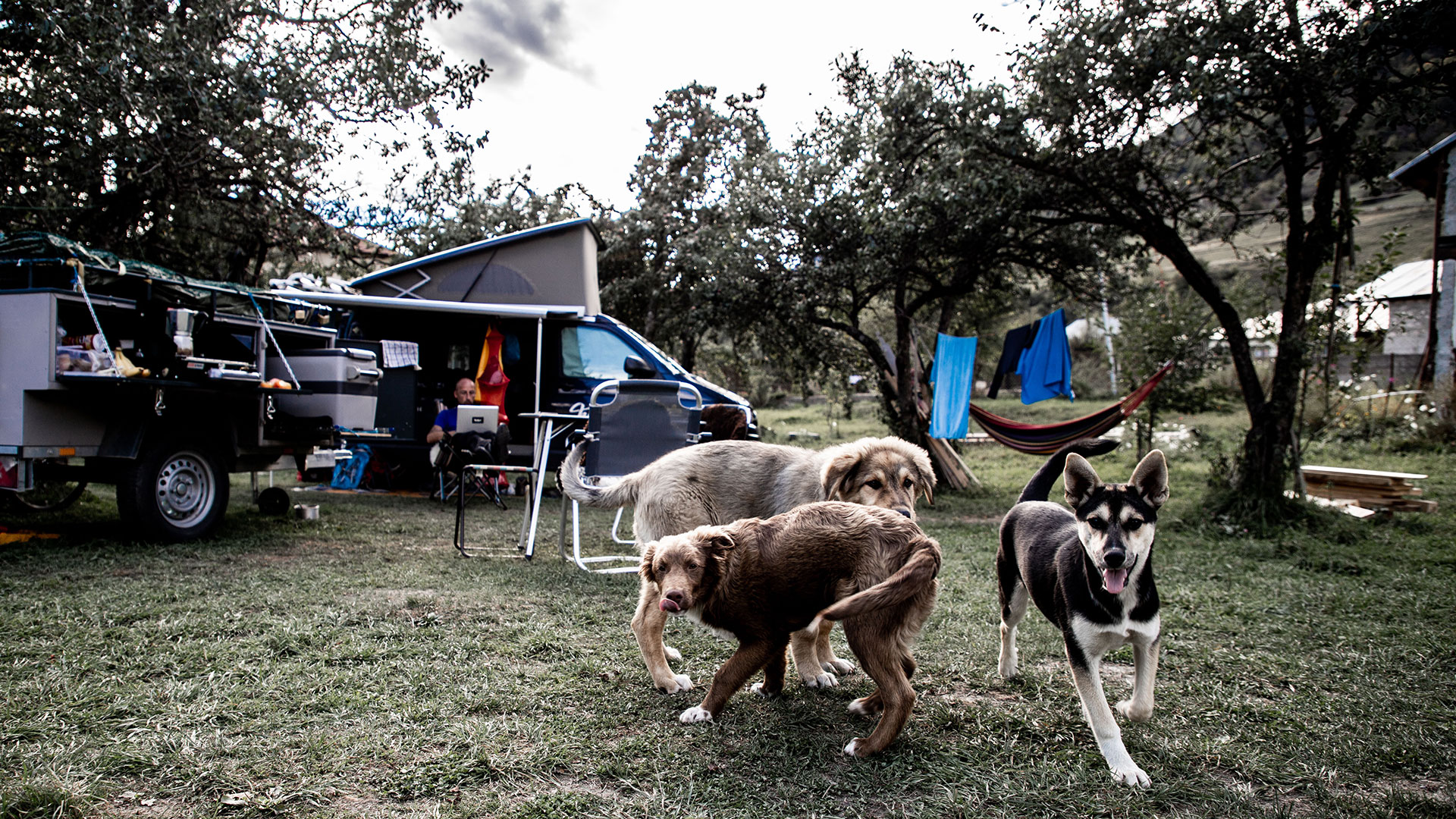 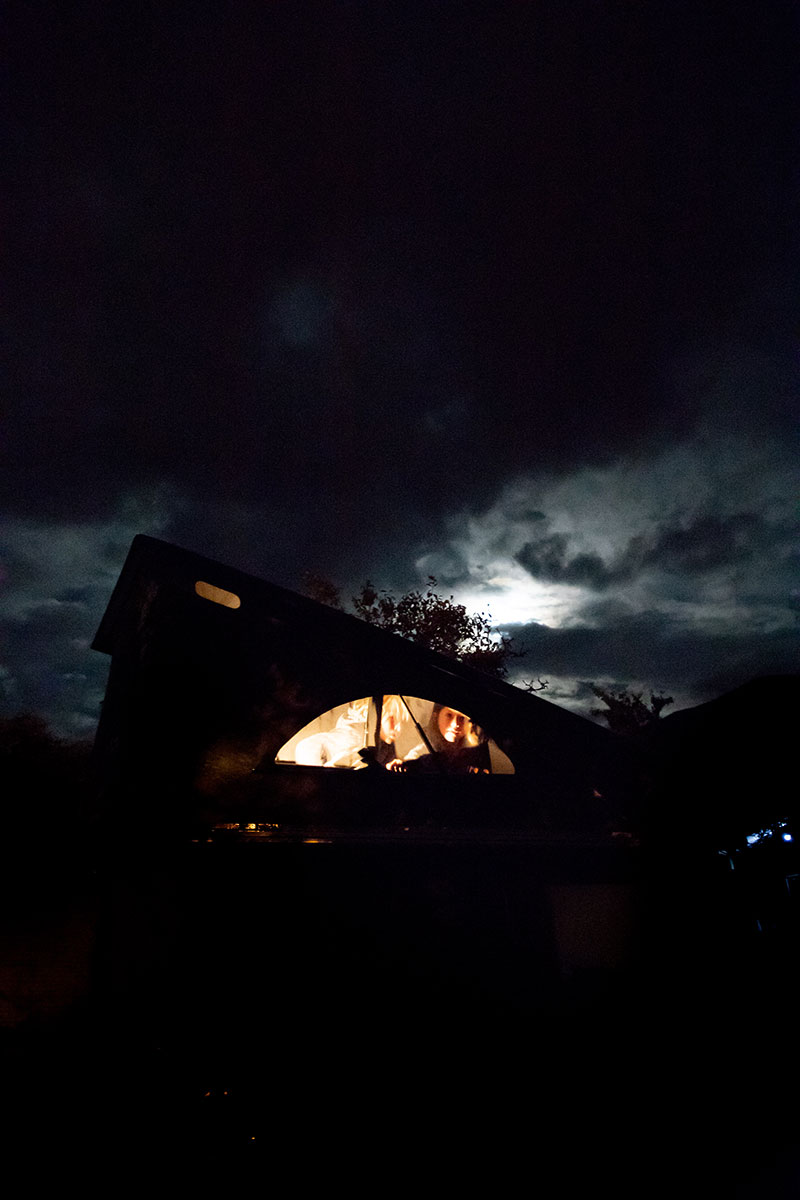 Simon Maes and his wife Lena Korchilava, a Belgian-Georgian couple organise tailor-made trips in Georgia and the Caucasus.
No fixed programs or standard travels, but everything is customised to the traveller’s specific wishes and needs.
Simon was so kind to help us out with the rough planning of our trip through Georgia.
Thanks a lot Simon.

Davit is a really nice guy that took us around Ushguli to see the sights. He also guides hikers on one or more day trips. He speaks very good English and makes an interesting conversation.
For those who want to come to Mestia in the future and need inside information… Davit ‘s your man.