26 Oct Endless views, “holy crap this far east”, city life… and a trip to the postoffice 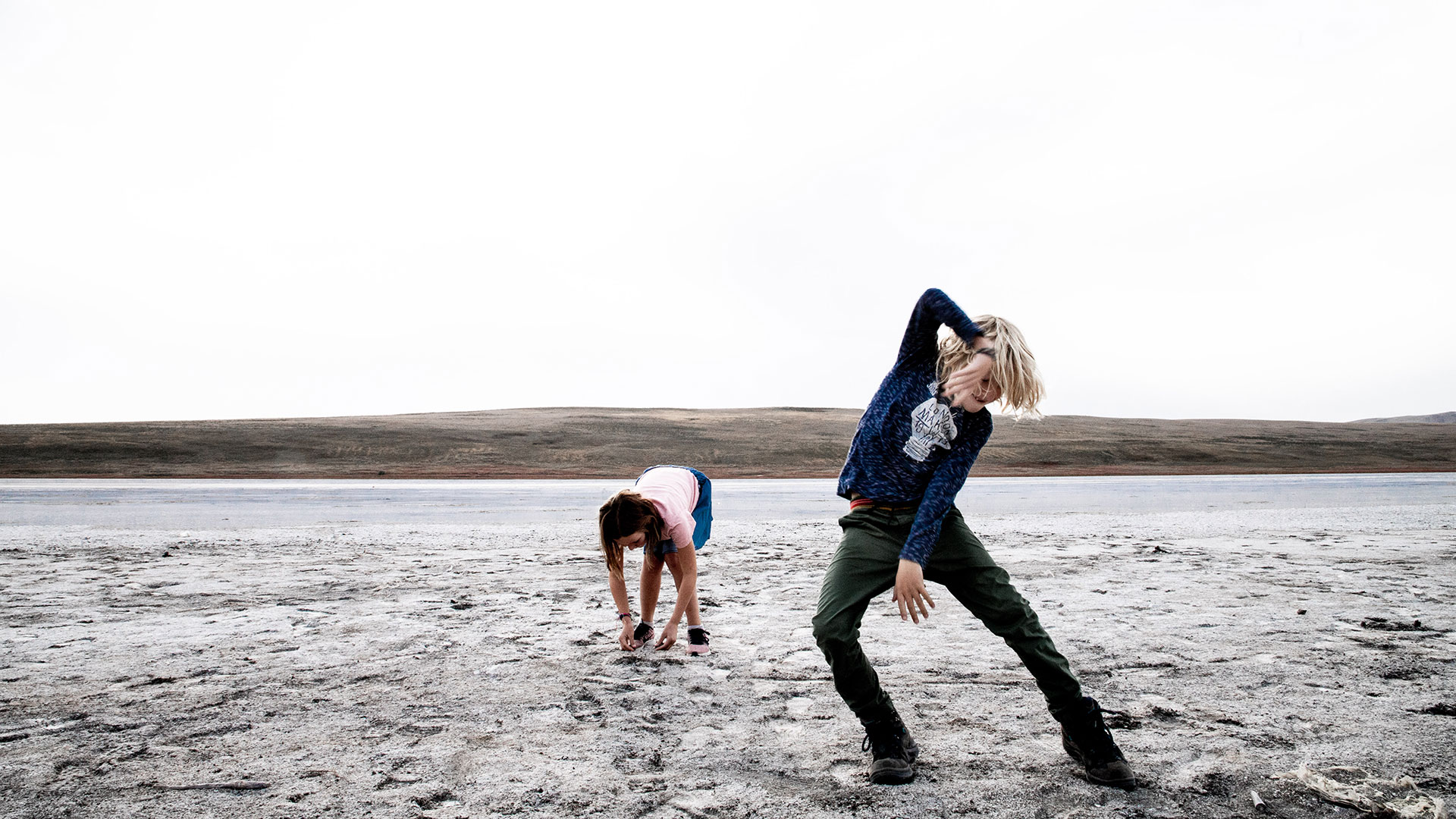 We left Kazbegi, the place we fell in love with.
We were ready to discover new places and to do new things.

This time we left for Kakheti and what would be the most eastern part of our journey.
First, we spent three days in Udabno, in a nice, bit alternative guesthouse, where we felt right at home. The scenery couldn’t be more different from where we came.
A gently, sloping, steppe landscape. Dry grassland filled with sheep, horses, cows, goats and their keepers, snakes and majestic eagles in the sky. An almost endless landscape in which you feel small and insignificant. 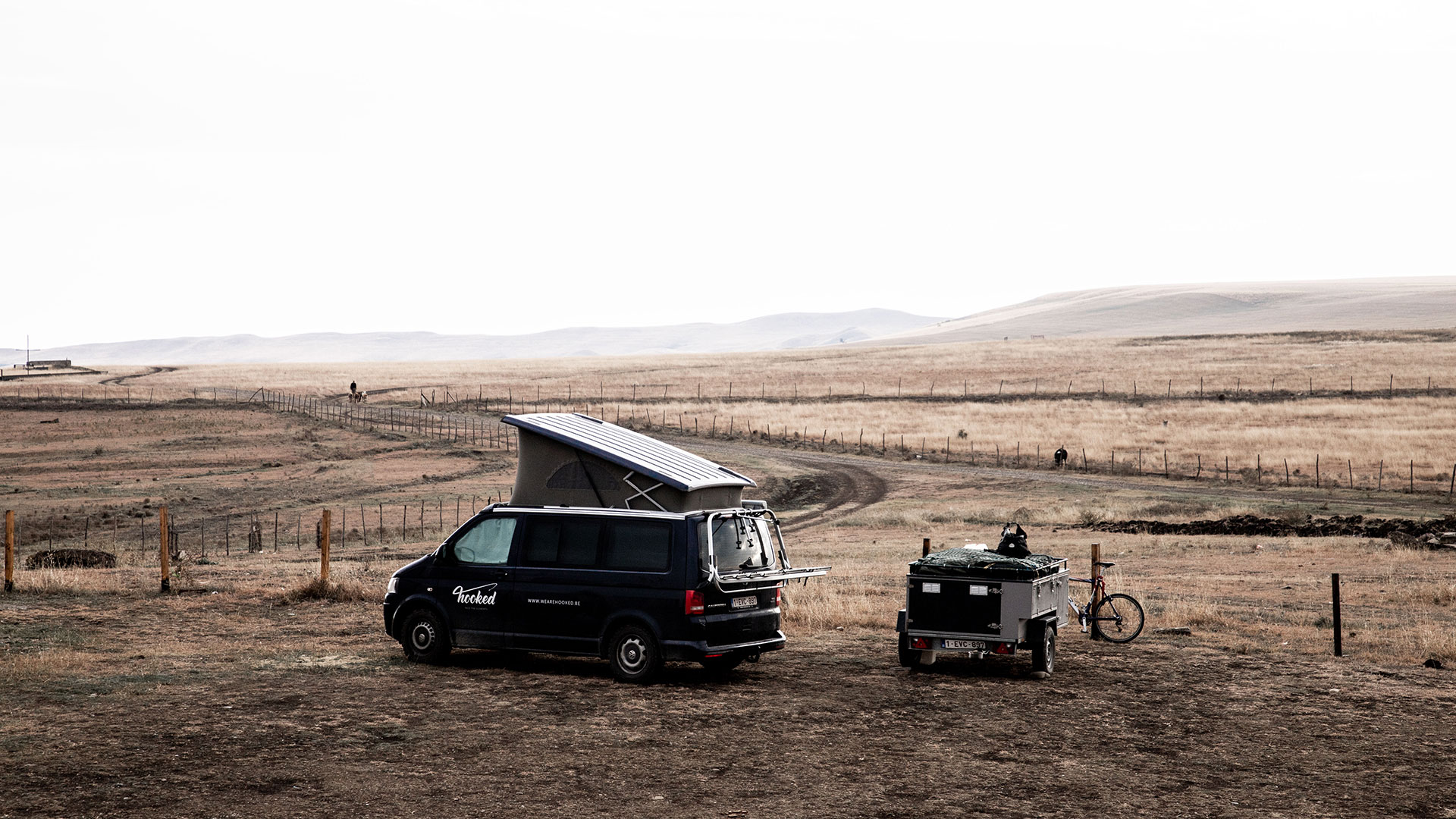 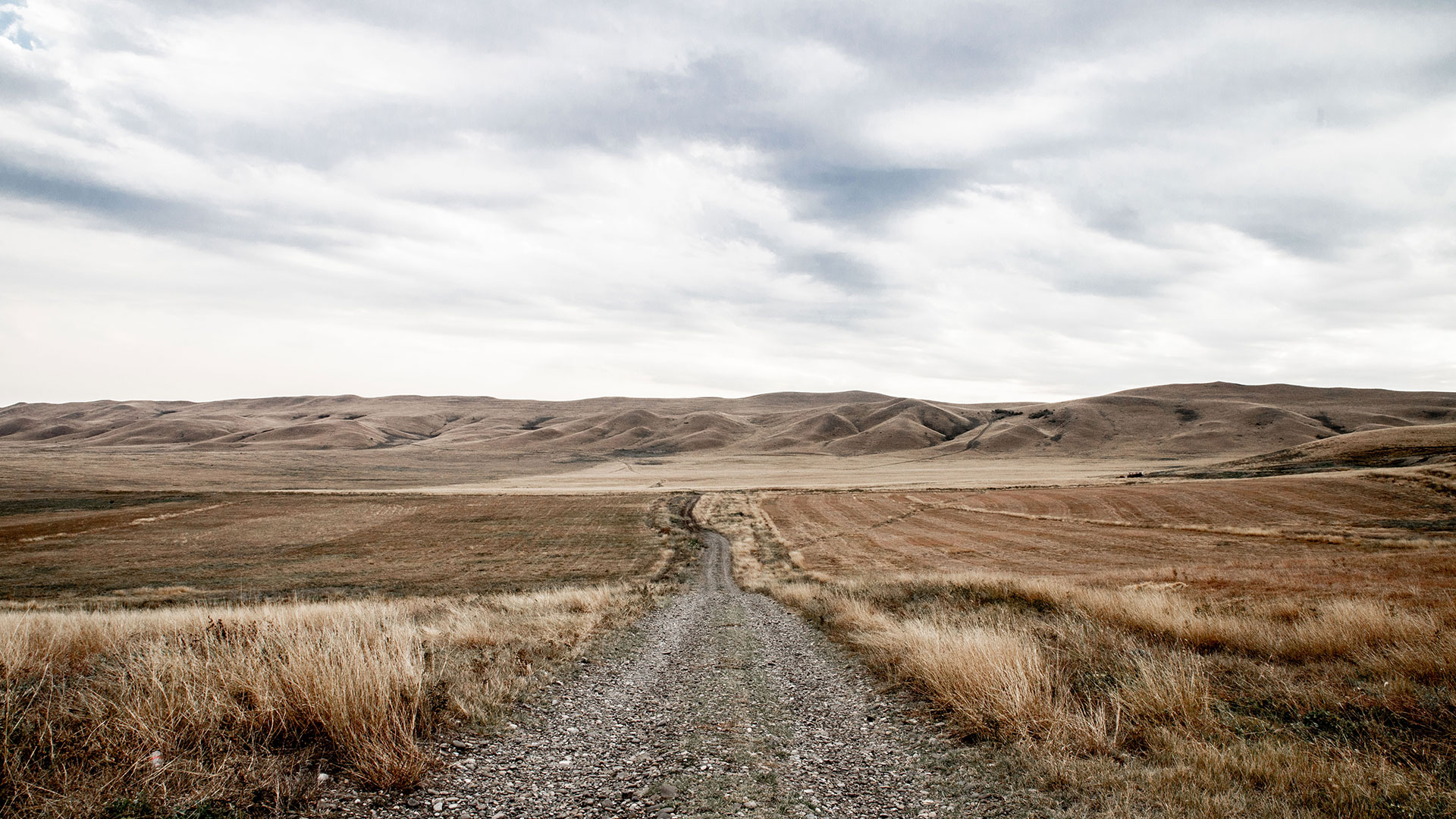 We really wanted to visit the Davit Gereja monastery complex. It was built 1500 years ago and is now the centre of a dispute between Georgia and Azerbaijan. But we were there to see the monastery and the hundreds of chapels, churches and cells hollowed out of the rock face.
Visiting a religious site like this is from a whole new level and much more fun than we’re used to.
First of all, it’s completely outdoors and the views are amazing.
Second, it feels like a hike through a harsh, uninhabited land.
Third, there are lots of opportunities to climb rocks and search for hidden places.
Forth, you’re free to walk around anywhere except for the border with Azerbaijan.
And last, you can also go looking for lizards or wait for an eagle to fly by.
In short, tons of fun stuff to do as you please.
It’s really worth a visit but if you drive your own vehicle like we do… Prepare for a bumpy, creative and slow ride.
I’m really glad that I bought myself a nice set of all terrain tyres. 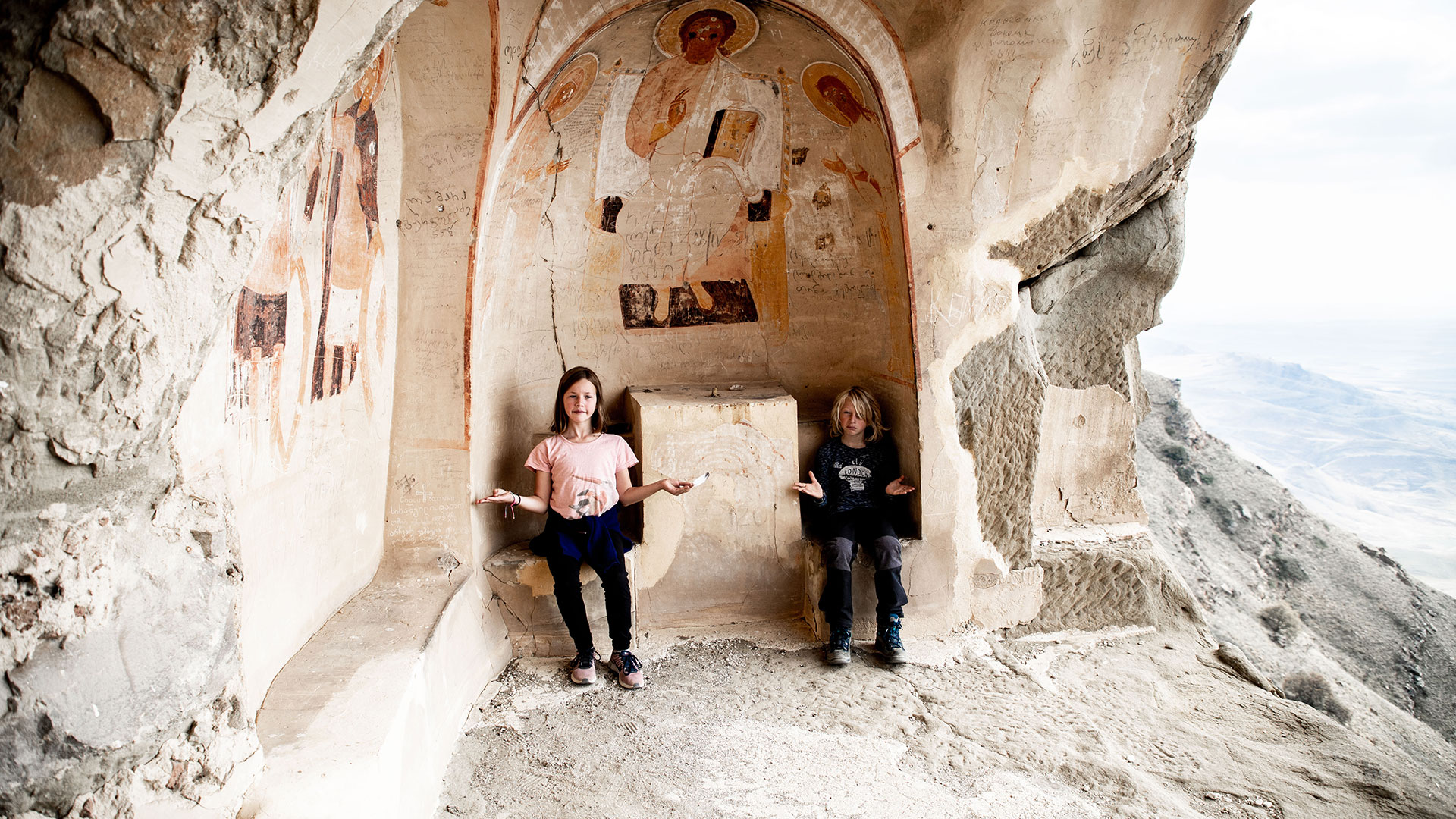 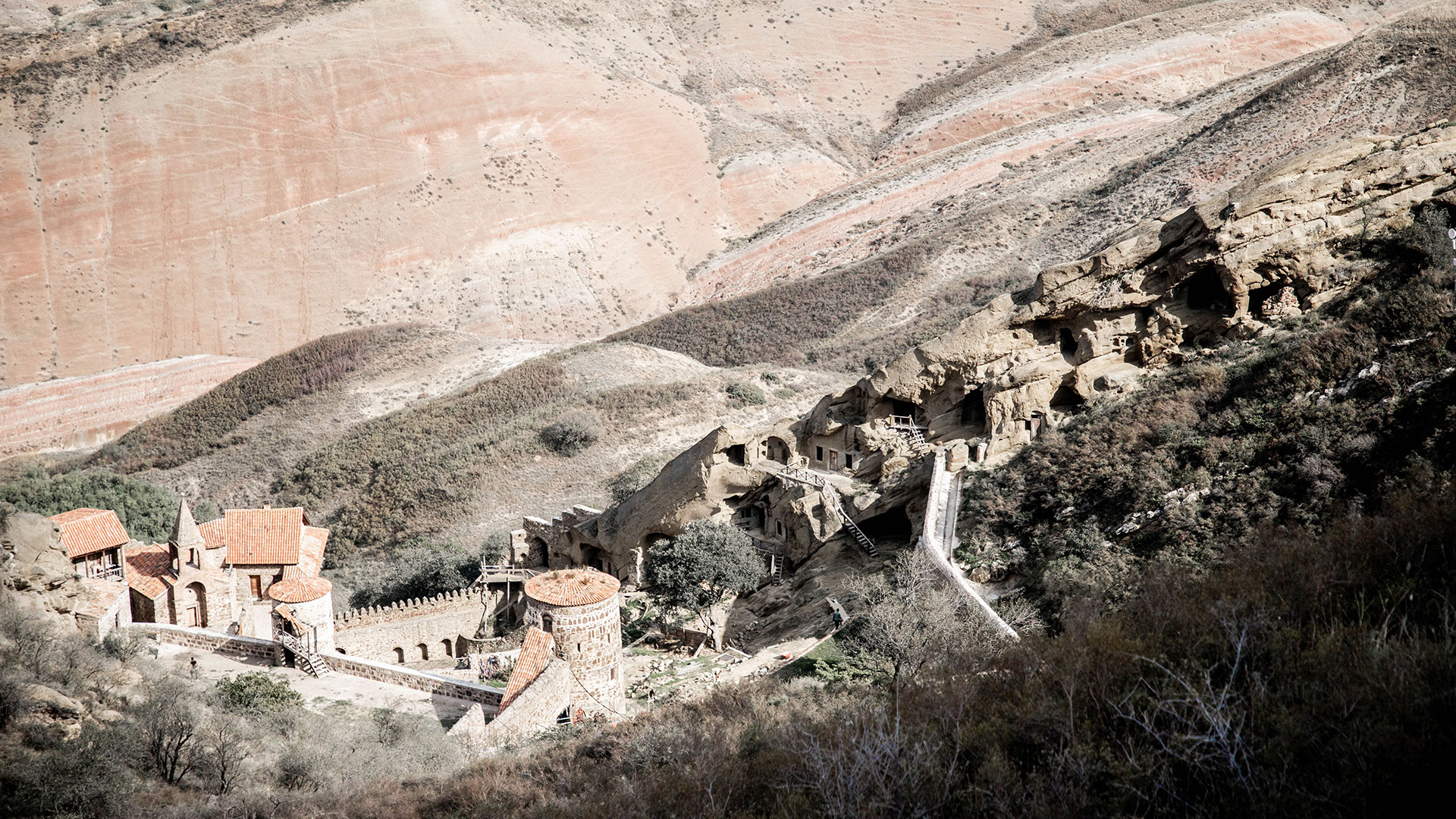 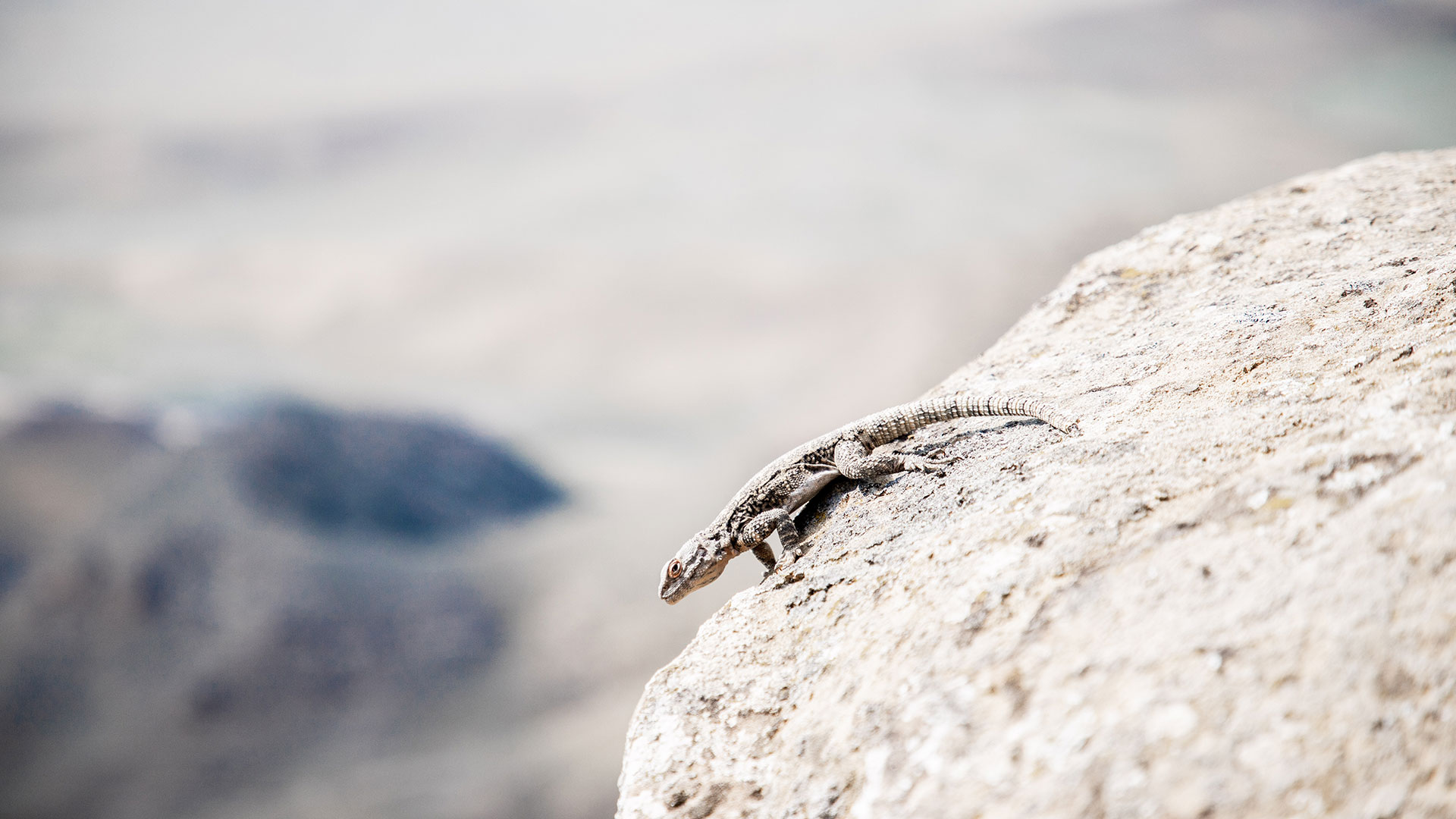 From Udabno we drove east again to Lagodheki National Park. The weather was shit so the hikes we planned weren’t a possibility. So it became a bit of a light version of what we had in mind for the place. The first day we only went up for a few hours in the rain and the second I went out alone for a 15k trail run. They said that there was a minimal chance to see bear, but… Indeed, I didn’t. I had to settle with a big, noisy, black woodpecker.
It was refreshing though, to walk in a forest of large, leaved trees again. It had been a while. 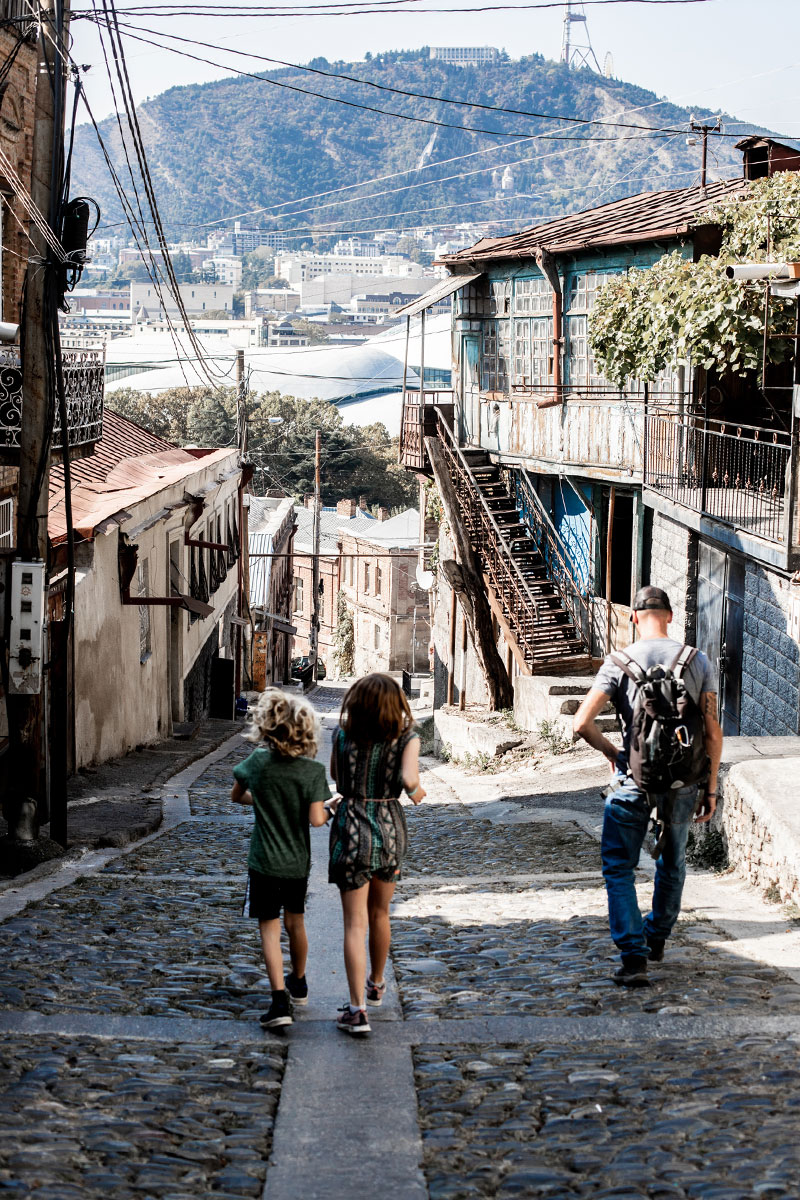 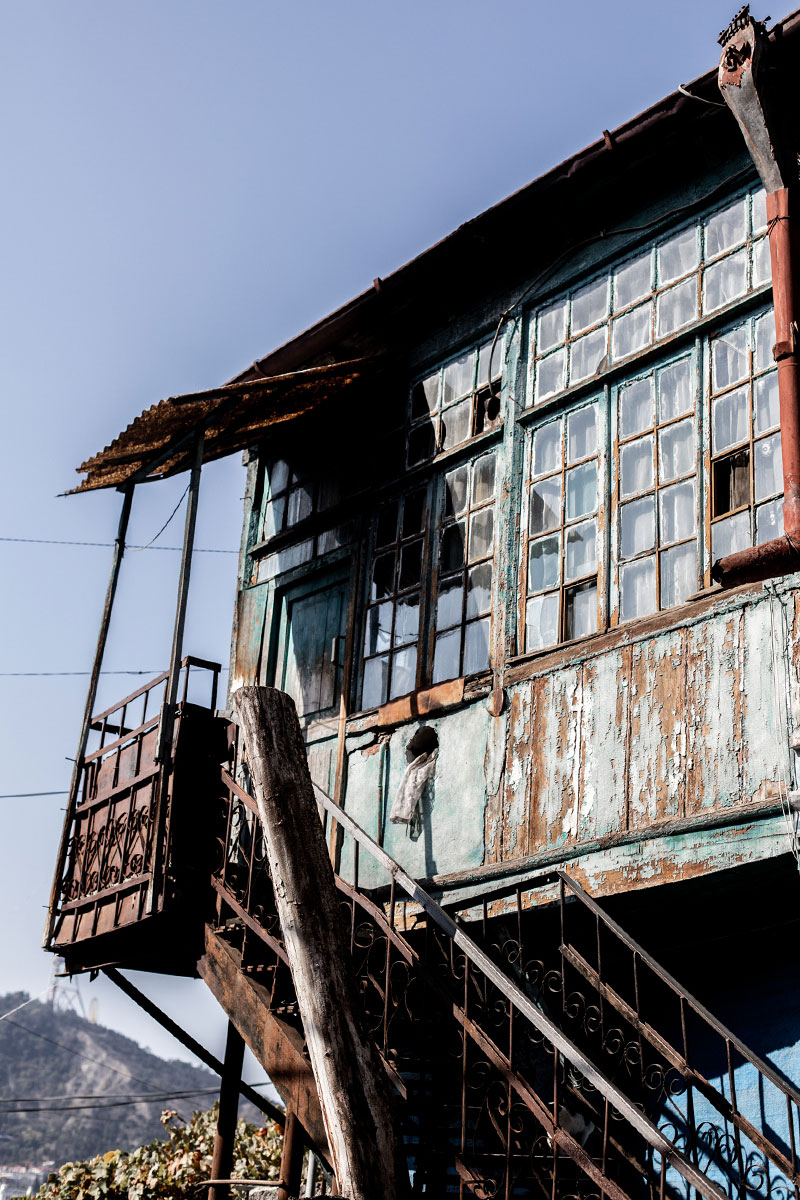 It was time to move again and… (again) for something completely different. We left for nine days in Tbilisi where we would stay in an actual house again. It’s a city that had to grow on me but it did and I can say that it’s well worth a visit.
It’s busy, noisy and full of life. On one side you see the old city with small and narrow streets filled with old houses in very poor shape, on the other side you see a fast modernizing city with modern and striking architecture and between those two extremities there’s a lot to do and see.
For me it’s not ‘the’ place where I would go to visit museums or where I would go to get lost in one of the many small and romantic quarters.
It’s more of an experience to visit Tbilisi. There’s no way to describe its real DNA.
You just have to go there and when you do, take the time to let it soak in, “live as a local” as Katrien calls it.

That means that shopping at a local market and cooking your own food is recommended. The spices, dairy, flour, rice, juice, fresh fruit and vegetables, the fish and meat,… all fresh and delicious. But don’t be surprised to see piglets lying in a fridge or a hundred fish, chickens or ducks in a small tank or cage. It’s not like your hometown supermarket where everything is neatly packed and unrecognizable. Or go to a bakery to get some of the delicious Georgian bread, freshly baked right out of the oven, all day long. Don’t expect to choose between bread with all kinds of grains and fibers, nope just the one. Buy you’re coffee beans fresh and have them ground on the spot, or ground them yourself, like we do. The possibilities are endless and we loved it.
And… it’s cheap, another plus, especially when you’re on a budget.

Walking through the city gets you everywhere you need to be. The distances aren’t extremely far but to return to our stay we usually took a taxi. They are cheap and make sure you arrange a price before they start driving. The bus, metro and cable car are also fun and practical and are even cheaper. An easy to reload card gives you access everywhere as long if you have enough credit.

Kartlis Deda view point, Narikala Fortress, the Bridge of Peace, Mtatsminda Amusement Parc, Sameba Cathedral, Sioni Cathedral, Rustaveli Avenue, MOMA Tbilisi, the Dry Bridge and the flea market, refreshments at the fancy Rooms Hotel, bathing at the public bathhouse, cosy coffee and wine bars, delicious food at Ezo’s, a sunny beer on an even sunnier terrace, chillin’ in the parc,… The city has a million things to offer. 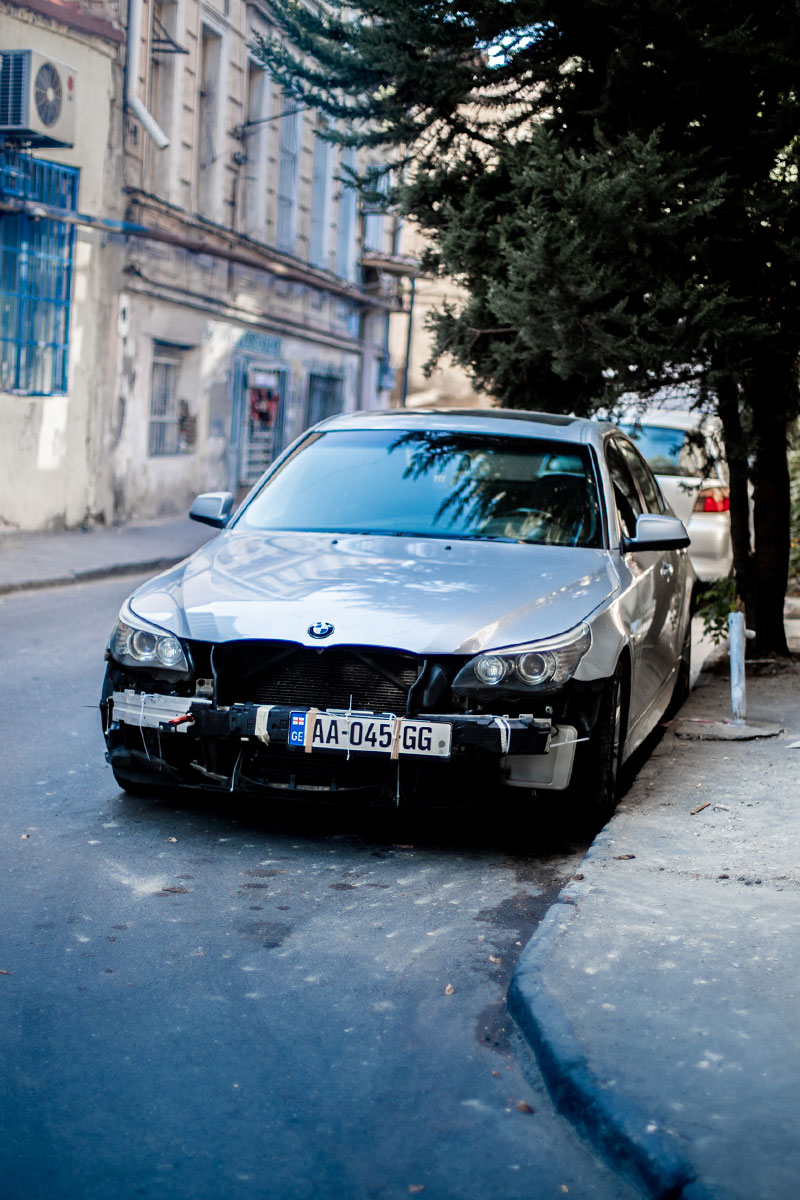 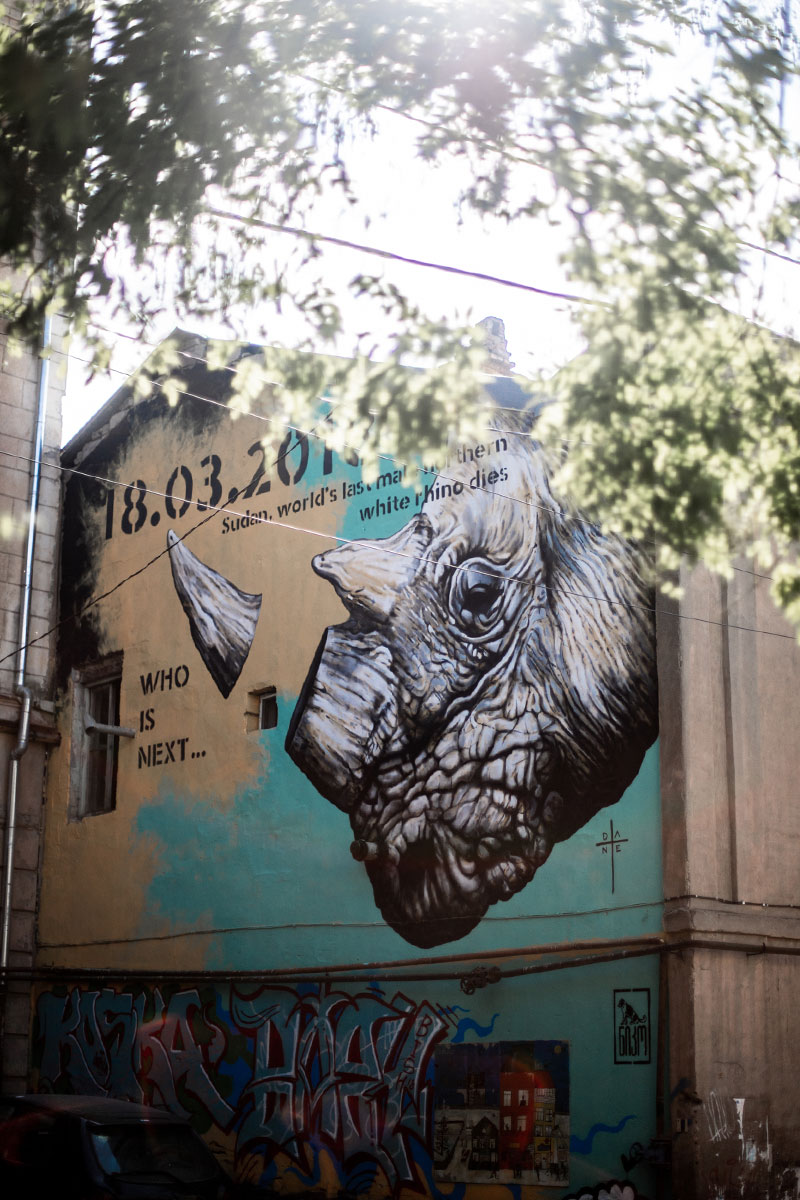 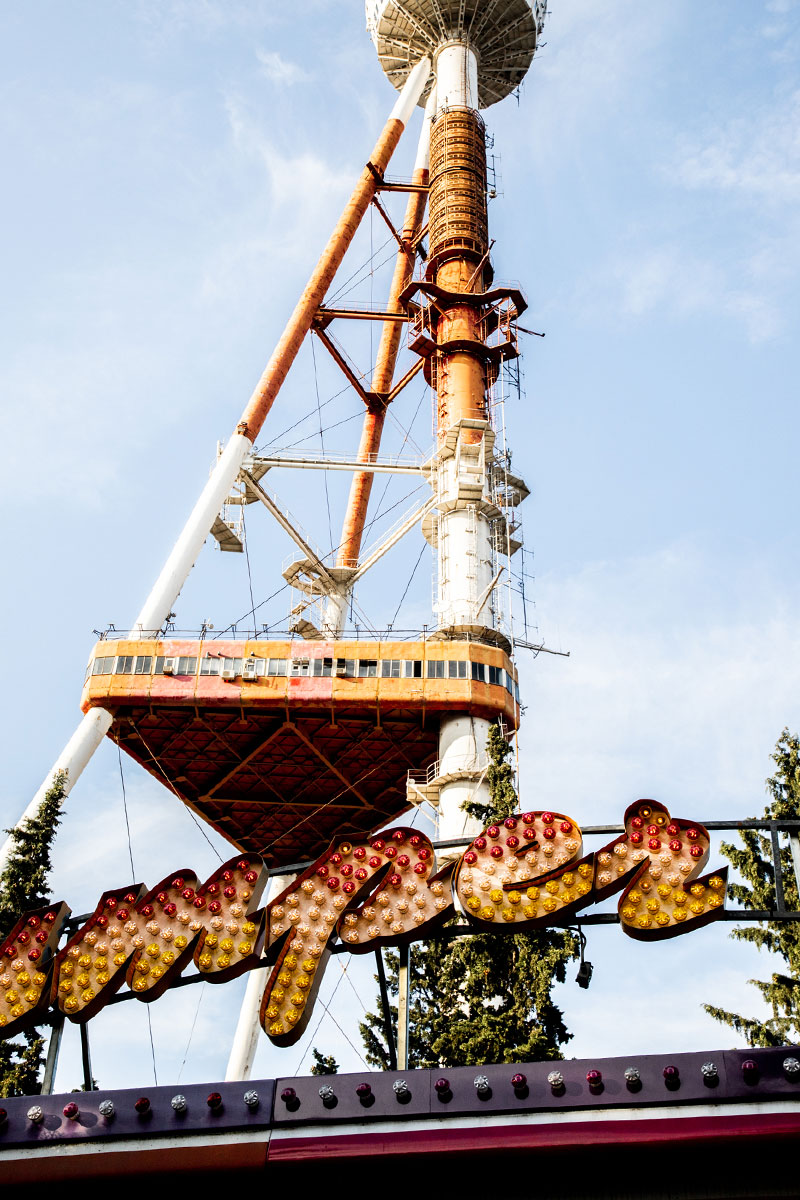 Did we like Tbilisi?
Absolutely, it’s a fun city to spend some time and has a lot to offer. We were also very glad to be in a beautiful and spacious house again a little bit outside the real city centre. It was relaxing to know that we had lots of time and didn’t have to rush things.

If you ever want to visit Georgia, as we highly recommend, Tbilisi is the perfect step stone from where you can easily travel to every other region the country holds. Everywhere you go (and you make take that literally), they offer you tours or taxi and bus services for very good prices. Only the idea that you can be in Kazbeghi in two to three hours, makes me dream about future trips. 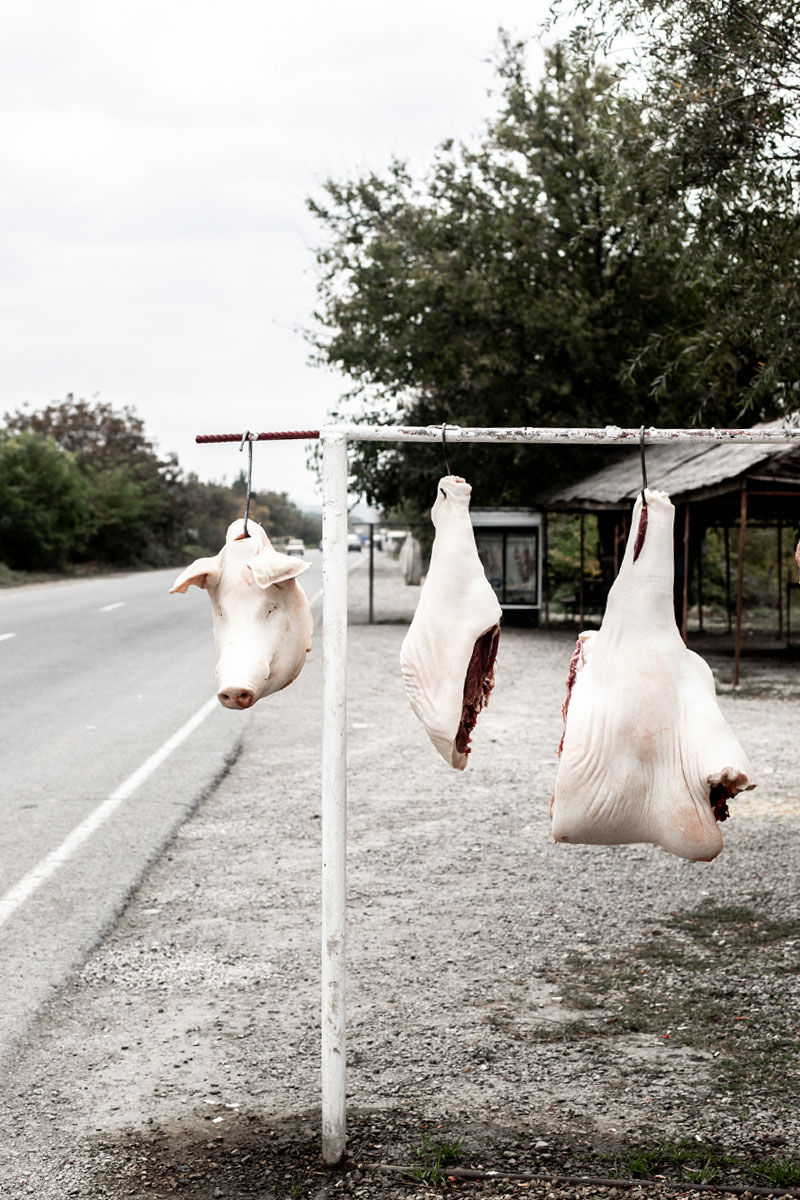 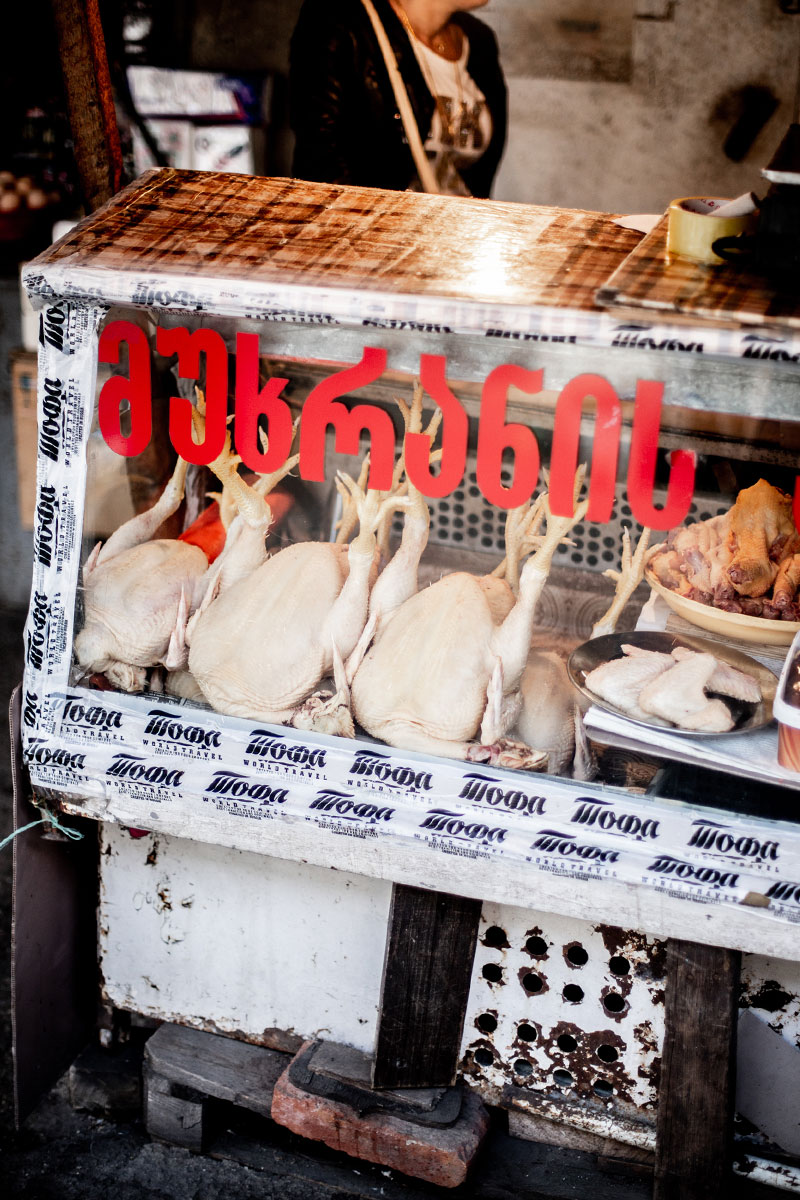 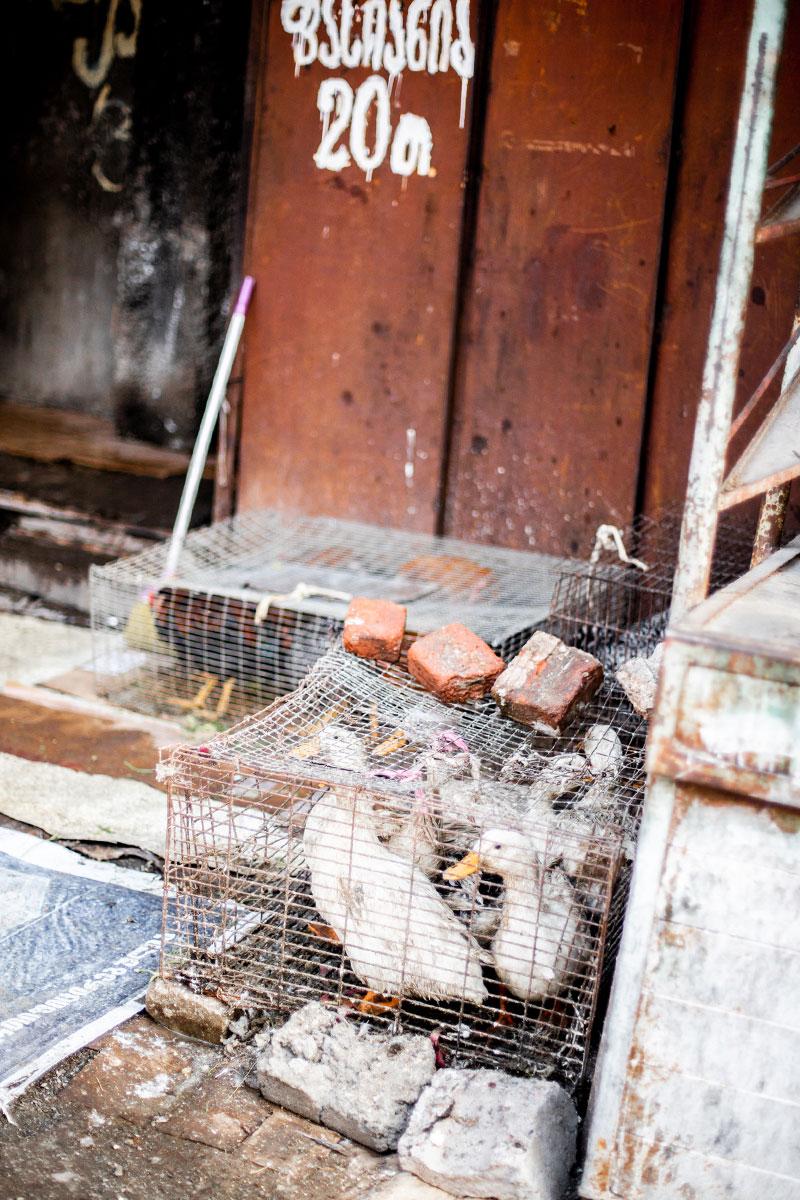 And for those who are not tired reading yet…
I wrote a little story about how I experienced the Georgian bureaucratic machine.

While travelling you learn a thing or two about yourself.
In my case, I don’t like crappy Internet and I hate bureaucracy or beadledom (I really wanted to use the word).
It’s easy to get annoyed by those things or even mad as hell, but does it help?
This question I solved, no it doesn’t. It’s easier to just relax, see what happens next and it will al be fine in the end.
How I learned, read the story.

Today a package from Belgium had to be collected from the post office. We have a post address here, a friendly neighbour from where we stay.
He told us through translation of his daughter that we had a package that needed collecting. But no worries, the kind man would join me to explain the necessary things. So we arranged to go together by bus, which is cheap and easy if you understand the language.
On the way we had a very small conversation about how the new cathedral was build on top of an old Armenian graveyard and with that his great grand father. We heard that a lot of people don’t really like the cathedral and now I know why. It’s amazing how much you can tell with a combination of Georgian, Russian, English, German, facial expressions and gestures.
But like I said, we were on our way to the post office.
I was well-prepared with my passport, ID-card, receipt and interpreter at hand and when we came in, there was no line. So far, so good.
We went to the counter where the lady informed us that we didn’t have a number. So I excused myself and took a number from the machine behind me and turned to the lady again.
She pushed the button and I was allowed to give her the necessary documents. A large, sealed bag was brought, opened and the package came out. That was easy… and than it all went to shit.
The lady noticed that my package only had my last name on it so she got confused. No one sends a package without an official surname, right?
Well, I was born in 1978 and it was common to give the new born multiple names to honour the godparents. So in my case it’s Jan Josephien Marcel. (It has a ring to it, not?) And all three are on my passport but not on the package.
That seemed a big problem, no names, no package.
Than I tried to plead my case but the lady started to get annoyed by me, something I could tell from her rolling eyes and big sigh leaving her mouth.
Time for plan B, take the package and run, but probably a bad idea.
It was time to simply surrender and roll over.
So I kindly asked her how we could solve this situation in a quiet and civilised manner.
Well simple, the sender of the package has to write an email to the Georgian Post to say that he really meant to sent the package to that specific Jan Josephien Marcel Bergs in Tbilisi, Georgia. Then they can change it in the system and than the package will be cleared. I told the more than patient neighbour he should go and that I would take it from there. I took my phone out called Katrien who called the sender and I had time to look for a bench in a park to wait for things to fall into place.
Well, things didn’t fall into place, nope. After a few hours I received an email saying that I needed a special form called CN17 and that it had to be filled out by the Belgian Post to confirm that I’m really the person I claimed to be. And, that it had to be sent to the Georgian Post so they could update my personal information.
I tried to plead my case again, this time by email, but the answer remained the same, no CN17, no package.
As it was Friday night, I knew I had to wait until Monday to get things going again. Luckily I have an inside man at BPost, so I called him and sent him al the necessary elements to complete the CN17 form. On Monday he filled out the form with the necessary gibberish and technical terms, mailed it to GPost and guess what…